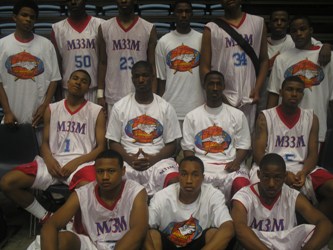 It was dejavu all over again as the M33M Memphis 15's had another opportunity to run through the Bob Gibbon's Tournament of Champions field without a hitch.

Last season led by Tim Peete (Memphis Central) and Mardracus Wade (Mitchell) the boys captured the trophy and it looked like more hardware for another year.

Running through pool play at 3-0 the Ballerz handled a tough Playaz squad in the quarterfinals. Next a nice win against a very good United Celtics squad set the tone for a battle with arch nemesis the Ohio Basketball Club.

The championship clash was a rematch of last season AAU national final.

The Ballerz held tight but came up short in the end falling 60-45 and bringing home the silver.

Adonis Thomas (Melrose) led the scoring with 10 points and for his effort was named to the 15 and under All-Tournament squad.

Thomas was fantastic all week averaging around 13 per game for the tourney. Also making the All-Tournament squad and the leading scorer for the Ballerz at 14.6, Ray Parks (St. George's).

Parks has trimmed his build and played hard, quick and tough the entire weekend.