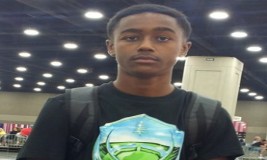 Team Thad 16 and under squad made the most of their trip to Louisville collecting a Final Four appearance at the ultra competitive AAU Super Showcase.

Playing in the gold bracket after sweeping pool play the Memphis crew held off a young and talented St. Louis Eagles to the tune of 71-70 behind some sterling play from Mikkel Normant (Fayette-Ware).

Micah Thomas (Briarcrest) found his groove in the next game against the All Iowa Attack as Team Thad cruised to a 61-56 triumph.

In the final four contest Thad found themselves on the short end of a 65-50 loss to the always powerful All-Ohio Red squad.

Normant was an offensive force showing no fear when gliding to the hoop or knocking down jumpers from the wing. His effort in the tough win over the Eagles was witness by many.

Thomas started the tournament a bit slow but came on as the bracket action intensified while Clayton Hughes (USJ) showed his athletic prowess with some rim rattling dunks and several soft perimeter jumpers. The rising junior scored several D1 offers for his efforts in Louisville.

Inside Team Thad used the powerful board work of Tennessee football commitment Emmitt Gooden (Haywood County) and Reggie Taylor (Whitehaven), a 6-8 rising junior who showed some promise blocking shots and keeping people out of the lane with his length.

Guard play was a highlight for the Bluff City boys led by Normant, Demonte Person (Kingsbury) and Jordan Bone (Ensworth).

Person was a sticky defensive pest despite his diminutive size and Bone showed an offensive flair with several deep threes and some timely forays to the bucket.

The future bodes well for the Team Thad program with this lively and talented 16 and under group ready to assume the mantle next season.