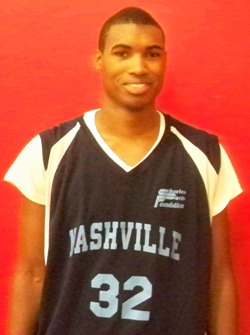 Saturday I took the day and went to the String Music Showcase at the A-Game Complex in Franklin for a day of tournament hoops.

In the 17 and under division the day was highlighted with a showdown between two of the states top squads in that age group the Nashville Celtics and Team Nashville.

Corn Elder (Ensworth) scored a runner with little time remaining on the clock thwarting a huge Celtics comeback and lifted Team Nashville to a 74-72 victory.

Caymon Dial (LaVergne) performed like a young man who knows how important this summer is for his future, finishing with 25 points on a variety of dunks, threes and free throws. Dial was at his best during a huge Team Nashville run in the first half that lifted his squad to a 47-37 halftime advantage.

Daijon Williams (Clarksville) and Taylor Barnette (Kentucky) led the Celtics with 17 and 16 respectively, but the play of rising junior Demarc Richardson (Briarcrest Christian) is what caught the eye of all us in attendance.

Richardson, who would finish with 14 points, used his strength and size to overpower the smaller guards and a nice mid-range game to negate the advantage of the bigger ones.

According to sources on Sunday, the Celtics received some outstanding performances from David Howard (MBA), who scored 26 and 24 in consecutive games and rising sophomore Reggie Upshaw (Baylor), who performed double duty also playing with the 16 and under Celtics. Jamal Smith (FACS) continues to show marked improvement in his rapid development.

Guards were in high profile for the Memphis Select in the day's opener. Robert Houston (Craigmont) and Myron Johnson (Hamilton) both played strong defense and shot the ball very well leading the Select to a win over a squad from Kentucky. Sam Edwards (Memphis East) is an intriguing young prospect. At a legit 6'11, he moves well for his size but must develop stamina and have someone show him some basic post play. He is capable and it will be interesting to watch his development.

In the 16 and under division, The Nashville Celtics were in a dog fight with a very good Arkansas Hawks in one of the later games of the evening. Upshaw was outstanding as he continues to learn his craft. Vonn Bell (Chattanooga Central) showed flashes in his game on the offensive end but must value the ball more if he wants to play the point. Joey Barnes (Ravenwood) has some height but really lacks strength. His skill level is high and he plays tough. He could be really good with some added bulk.

The Mid-State Ballerz West lost a heartbreaker to another one of those Kentucky squads despite some outstanding efforts from Maleek Hall (Kenwood), Robert Brandon (Siegel), Jay Gordon (Westview) and Devon Davidson (White County).

The Nashville Celtics 15 and under squad went on to capture the title on Sunday in their division. The game between those same Celtics and Select Basketball was a very good 15 and under contest with some very good young prospects on both ends of the floor.

Andrew Cowie (BGA), Jake Allsmiller (CPA) and Andy Schumpert (Brentwood) played outstanding in the victory over the eventual champions. Braxton Bonds (CPA) was himself equally outstanding controlling game tempo and firing nasty passes all around the A-Game complex. The growing young man also found time to score some buckets with an improved floater in the lane.

Jaylen Barford (Southside), Brandon Donaldson (Henry County), Daniel Norl (Kenwood) and Marcus Graves (Ravenwood) all played well, not only in this game but throughout the event. Norl is a big-time shooter, Barford can create his own shot and has excellent length, Donaldson is a beast and Graves is a smooth lefty who continues to improve his handles and scoring ability.