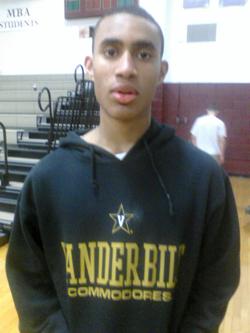 The Mid-State Ballerz 16 and under squad captured the inaugural crown at the Showdown of the South with a tight 32-27 victory against the Alabama Lasers.

The Lasers held the ball to prevent the Ballerz from running thus the low scoring affair. Rafeal Tyler (Lake County) was outstanding in the title game while newcomer Caleb Chowbay (Mt. Juliet) was able to control tempo from the lead guard spot.

On Saturday, I was able to view numerous games in the 16 and under division including the Ballerz 80-54 victory over the Tennessee Tigers. Aaron Wheeler (Morristown East) led the Ballerz with 20 points on a variety of tough drives to the bucket, Tyler added 12 points. Chowbay was outstanding setting up his appreciative teammates with fundamentally sound lead passes leading to easy scores for the likes of Tay Kennedy (Dyer County), Dee Oldham (Wilson Central), Chase Winslow (USJ) and Antonio Miranda (Morristown East).

Webster was instrumental scoring 10 points as the Tigers slipped past Team Nashville 69-68 in one of the day's most exciting contests. The game was a back and forth affair after Cornelius Elder (Ensworth) dropped a three putting Team Nashville up 60-59 with just over 3 minutes remaining on the clock.

Webster would trade hoops with Elder before Lamont Claybrooks (Stratford), who finished with 16 points, scored to put the Tigers ahead. Another Elder bucket gave Team Nashville a brief advantage before freshman Danny McGrath (Brentwood Academy) grabbed a tough rebound and scored putting the Tigers ahead for good after successful foul shots from Claybrooks.

Ross Welch (DCA) finished with 16 for the Tigers on an array of deep jumpers and timely forays to the hoop, very impressive.

Blackwell was outstanding in this tourney showing an improved outside stroke and a deadly mid-range shot he pulls on the drive to the glass. He played with more aggression and really stood out. Devin Robinson (Ravenwood) played solid all weekend as he continues to grow his game as well.