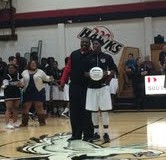 In Middle Tennessee things on the Junior College level are heating up.

Barford, who garnered every All-State, All-County and All-District kudo there was to achieve, flirted with some D1 offers yet settled on the TJCAA school.

The Bucks recruiting class got off to this fast start when they nabbed Class AAA state champions power forward Reid Pierce (Blackman) early in the process.