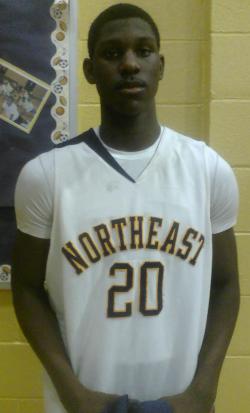 The following is the list of the entire district scoring that I could ascertain. Many outstanding efforts and now on to the region and sub-state just around the corner

If we miss someone on the list please let me know, I try to ascertain as much info as I can but sometimes the info is not available, feel free to send me an email at andre@tnprephoops.com with any scoring info, interesting facts including 1,000 point scorers and such.

Ben Arnold (Cumberland Gap) smashed the school record for points in a game notching 38 in a district consolation win over West Greene.

Lester Wilson (Carter) scored 29 points in a district championship loss to Fulton and is approaching the 3,000 point mark standing at 2918 markers, not bad for a guy who didn't get a Mr. Basketball nomination.

Logan Lyle (Unicoi County) is forever etched in Erwin lore after becoming the schools all-time leading scorer with his district winning efforts this past week.

Wes Grace (Red Boiling Springs) is attempting to put his all time leading scorer status at RBS out of reach as he passed the 2,000 point mark during district action.

Jalin Denton (City University) is a bit overshadowed in a city like Memphis playing in Class A but his efforts were anything but unsung as he notched 27points in the semi-final win over Douglass and 30 in the title game loss to Westwood.

Jethro Griffin (Sequoyah) and Tevin West (Sequoyah) are a vital part of the success at Sequoyah this season and both senior guards passed the 1,000 point barrier during district play this past week.

Nathaniel Hughes (Hampton) had an outstanding week securing a finalist nomination for the Class A Mr. Basketball award.

Zavion Williams (West Creek) showed out in the district tournament notching 31 points in the semi-final win over Dickson County then blasting 26 markers and engineering an upset of regular season champion Clarksville in the district championship game.