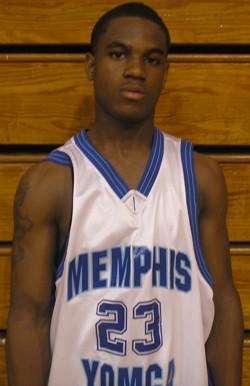 The final chapter of the Nike Elite Youth Basketball League took to the bright lights of the Los Angeles skyline for Memorial Day with our two Tennessee representatives hoping to gather enough wins to be considered for selection into the prestigious Peach Jam in July.

The Memphis YOMCA and the Tennessee Travelers each battled for five games including a contest against one another.

In the opening game, the Travelers got a last second bucket from Galen "G-Smoov" Campbell (Fulton) on a sweet dish from "Dirty" Dre Mattheiu (Knoxville Central) to get past the Georgia Blazers 85-83.

Stokes continued his fine weekend scoring 23 points and snatching another 13 boards in their second round 96-80 victory over the Travelers. Davis added 19 for the Y. Campbell, Wilson and White all finished in double digits for the Travs.

In their third contest the Travelers fell to a very athletic Mean Streets squad 66-55. Bradshaw led the scoring brigade with 13 points. Wilson added 11 and Campbell finished with 10.

Bradshaw connected on 18 markers in the Travelers fourth contest a loss to the Louisiana Select.

Stokes was huge in the YOMCA's fourth contest, a 64-59 win against Team Final and Class of 2011 poster boy Michael Gilcrest.

The Memphis future outscored the highly rated Gilcrest 22 to 20 and managed to find the time to snatch 10 boards.

A close contest till the waning minutes when Kaspar knocked down a big three to give the Y a 5 point cushion then took a big charge against Gilcrest to get the ball back in the good guys hands.

Dominique Harris (Mississippi) also finished his night with a double/double going for 13 points and 11 boards.

Stokes closed out the weekend with 14 points as the YOMCA fell to the Wisconsin Playground Elite 61-57.

Harris added 13 points and Clear dominated the boards with 11 points.