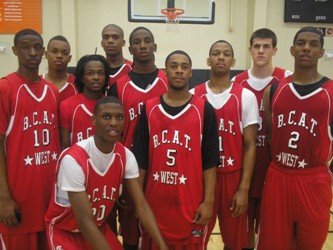 North Carolina signee Leslie McDonald (Braircrest Christian) dropped 26 points to lead the West squad to a 97-93 victory over the East in the inaugural BCAT All-Star game at Middle Tennessee Christian School in Murfreesboro.

BCAT is the acronym for the Basketball Coaches Assosciation of Tennessee.

The East used a furious late comeback and a couple of buckets from Nathan "Stat-Man" Parker (Bearden) to bring themselves within striking distance of the talented red squad.

A Parker tip-in closed the gap to 91-88 before an Ian Clark (Germantown) lay-up and a couple McDonald foul shots moved the margin back up to 95-88.

Chattanooga signee Josh Odem (Science Hill) stroked a smooth three and manuvered his troops to within 95-91 with only 21 seconds on the clock.

An opportunistic West turnover resulted in no points and the boys from down I-40 way settled in for the victory.

For the West squad McDonald led the scoring with 26, while teammate and George Mason signee Johnny Williams (Briarcrest Christian) pitched in with 19. Derrick Walker (Covington) and Zach Jones (Craigmont) finished with 13 and 10 respectively.

Odem was high man for the East with 19, while Carson Newman pledge Trey Carruthers (Harpeth) finished with 14 and Parker added 12.

A very nice event on relatively short notice will be something that hopefully continues to grow in stature as it gains momentum among the states coaches, players and fans.