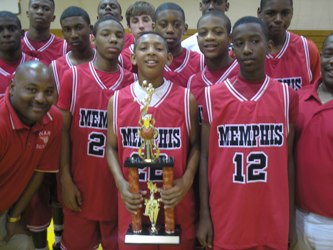 This weekend I made myself at home in front of the future.. the rising Class of 2013 brought their best to Seymour High School for the 14 and under AAU state tournament.

The Memphis War Eagles (Payne), behind 26 points from Leron Black, bested the East Tennessee Pyros 80-72 to capture the state title and prove we are in for some good times in the coming years.

Why no potential school for Black you may ask..are you ready for this, the young man is a seventh grader, yes Class of 2014, and clearly one of the best players in the event, period.

Showing a grit and determination inside, combined with a nose for putting the ball in the hoop, be it from the block, baseline or off the dribble. Black's scoring prowess and shot blocking ability on the defensive end helped the Eagles pull away after the Pyros had closed to within 55-52 on a buzzer beater from Kaseem Davidson (Oak Ridge) at the close of the third quarter.

As we mentioned earlier Black finished with 25 and Sam Craft (Bolton) added 11 in the win.

Davidson dropped 17 for the Pyros with Blake Golden (Knoxville West) chipping in with 14 and Rian Hall (undecided) adding 13.

The War Eagles focused their defense on stopping hot shooting Pyros guard Jordan Hall (Lenoir City), who had scoring outbursts of 23,12,13,and 23 in his earlier contests.

In the third place game the Tennessee Travelers behind 25 markers from Shannon Hale (Science Hill) bested the Knoxville Rhinos 77-57. Hall was joined in the scoring column by future high school teammate Will Adams (Science Hill) who scored 17 and athletic 6'5 swingman Alex Fountain (Wartburg Central), with 12.

Jamaal Calvin (McCallie) had a tournament best 29 in the loss for the Rhinos. The cat-quick sharpshooter dropped seven 3's in the contest. Burton Sampson (Knoxville Webb), had an outstanding weekend culminated by his 14 points in the third place defeat.

I will have a list of who I thought were the 25 best players in the event in a story tomorrow...so please stay tuned.

Thank you to all the players, parents, coaches and all who helped make the Rocky Top D-League a huge success this year. I will post results from this week and last weeks games at http://tnprephoops.com next week. All-League selections and the MVP will be announced next week.