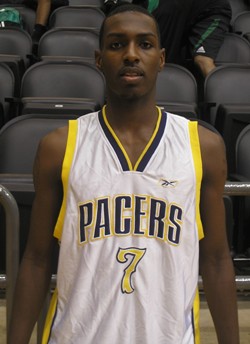 Talk about good fortune. Mardracus Wade (Mitchell) was at the University of Virginia as an invite for their elite camp this past weekend.

To his good fortune the NBPA Top100 Players Camp also happens to be at the University of Virginia.

After a late cancellation the staff sought out the Memphis baller and he was added to the Hornets who captured a victory in their opening game with Wade scoring 13 points on 4 of 4 shooting from deep.

Wade also knew this was a wonderful opportunity and put some serious defense on the nations top ranked point guard Brandon Knight.

Joe Jackson (White Station) also plays on this Hornets squad and was the teams leading scorer in the opening session with 14.

Afternoon games begin at 7:30 with a sweet match-up featuring the Hornets against the Rockets.

Not only will we have Jackson and Wade on the floor but the Rockets will feature Casey Prather (Jackson Northside) and Tarik Black (Ridgeway).