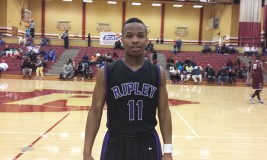 Highlights, highlights and more highlights dominated the scene at the BCAT/TACA East/West All-Star Classic this past Saturday at Riverdale High School in Murfreesboro.

Jordon Varnado (Haywood) seems very comfortable in the confines of the Murfreesboro zip code as the rising senior continued his stellar play. After leading his Tomcats to their first Class AA state title, Varnado dropped 31 points leading the West to an exciting 128-108 victory over the East squad.

The West got off to a rousing start behind buckets and dishes from Chad Culbreath (Ripley) and clung to a good sized lead for most of the game.

Isaiah Hart (Blackman) started hitting difficult and contested shots and before we knew it the East only trailed by 3 with roughly seven minutes left in the contest.

The West responded down the stretch and cruised home for the victory.

Varnado took game scoring honors with 31 for the West followed closely by Khalil Spencer (Ridgeway) with 22 and Culbreath with 21 and a dozen dimes.

Hart was high man for the East with 25. Jordan Bowden (Carter) chipped in with 18 in the loss.