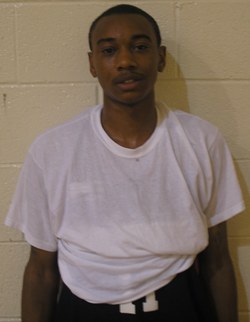 Intangibles are the keys word when describing this hard
nosed competitor. He is a consummate team player from distributing on offense
to taking charges on defense, his game is team first and his leadership skills
are off the charts. I would like to see him progressing offensively becoming
more consistent with his shooting and looking to score a little more.

Q proved to be one of the pleasant surprises of the camp
with his toughness, strength and all out hustle and stature. A man among boys
physically he was able to maneuver himself for tough rebounds and scoring
inside despite only being 6'1. I loved his short pull-up off the glass jumper.
His outside deep shooting will need some tweaking but he was a pleasure to
observe.

Here was another pleasant surprise with his size and
aggressive nature to the glass. He showed a good outside stroke that just needs
to have its release a bit quickened. He was able to absorb contact to the glass
but would like to see him finish more of these drives. As he adds confidence to
his game, with his size and aggressive nature he could be one to watch for the
next few seasons.

Fundamentally sound player who boxes out on both ends and
gets his hands in the passing lanes on defense. A capable outside shooter who
gets nice air under his shot, his release will need to be faster but it's
accurate and he made some tough finishes off the dribble.

This strong defender showed an aggressive side when guarding
in the post despite being undersized most of the time. Offensively he also
showed some nice quick moves in the post but will need to finish those tough moves.

One of the better shooters in the event with nice range and
a picture perfect follow through. His small stature limits his effectiveness
inside but he makes up for this with a toughness and determination. He needs to
use his deft outside stroke and add some one and two dribble pull-ups to his
arsenal.

Watching him run and play you know your looking at something
special for the future. His size and athleticism make him special but as he
grows and learns the fundamentals he could be big time. Jalen was fundamental
at the showcase boxing out and sealing nicely on the post-up. His shooting is
coming around and his aggressiveness will grow as his body becomes stronger.

E.J. is still rounding into basketball shape after some
injuries during the off-season. Played his role as team leader is simply his
forte, he made clear decisions with the ball, always finding the open man, and that's
not an easy task at a camp where everyone is looking to score. When his number
came up to score he was very aggressive to the bucket and always has that nice
stroke.

Lead guard who showed he could execute some offense in the
half court and was especially tough when guarding his man straight up on the
defensive side of the ball. His offensive game needs more work, especially in
his shooting but his effort was there throughout.

Dom is a good shooter with a nice lefty stroke but his game
lacks confidence. He has room for growth, but he can handle, is a good defender
and again shoots well. He struggled a bit with the post entry aspect but that
comes with repetition and gym work.

He seemed much more comfortable inside that on the wing so
not sure about his position. He did shoot the three but showed flashes of
potential inside with some shot blocking and nice high post entry. He has good
length but his lack of strength will continue to hurt him unless addressed. He
posted up on offense with effectiveness, also.

Young man showed some serious aggressiveness on defense and
was always looking to grab the loose ball. His offensive confidence looks to be
lacking as of yet, but he made some nice passes to potential cutters, so his
game is there, seize it young fellow.

Rising sophomore showed the camp he could shoot when left
open but still needs to add strength in order to be more effective as a
defender and an offensive threat. He has a good basketball IQ, seeing the floor
and finding open shooters for easy opportunities.

Youngster seemed to play a bit out of character at first
wanting to show he could score and got away from his effectiveness as a facilitator
and leader. Has the ability to play both guard spots and has some offensive
game but needs to let the game come to him.

Just from my observations, Overton has some talented young,
athletic, long guards. Lewis is another in this line, finishing at the rim with
either hand, plus being very active on the both ends of the floor. Very
aggressive to the bucket he can become more effective with an improved outside
shot to make him more versatile.

Rising freshman big man came to camp nursing some summer
injuries and wanting to get in better shape for the upcoming season. He has
some gifts to work with, boxes out well but will needs to strengthen his hands
and foot work ability. Once he gets some confidence he will be a productive
player.

Man is he fun to watch. A bundle of energy and an aggressive
nature that belies his size, give him an edge.  A pass first point guard who can simply stroke
the outside shot and goes all out to the glass for tough finishes in crowds. He
defends like an animal and makes his opponent dread his presence, very cool.

Solid guards seem to live in the Eagleville program and
Porter is next in line. A good shooter despite its flat-footed release, he also
showed a nice runner which is a very effective weapon for any small guard. He
ran the floor and seized his opportunities. Ball-handling was adequate but
could use some tightening.

He is an extraordinary shooter with a textbook release and
finish. He battled inside with the big boys for rebounds and is a good position
defender. He will need to tighten his ball skills which will help his dynamite
shooting stroke only that much more.

If there was a better run and jump athlete in the gym on
Saturday he was wearing Vanderbilt gold and black. D.D. plays with an aggressive
effort and got on the floor for loose balls. He explodes to the bucket and has
improved his handles to the point he may be able to run some point in the
future. Outside shot still a work in progress but getting better.

A better athlete than expected with a nice stroke on his outside
shot. He had good size and was active on the glass and effective in the post
entry game. His skill level will continue to grow as he spends more time in the
gym refining his post moves and other scoring options.

Rising sophomore is a small guard but never backed down and
gave maximum effort while he was on the floor. To become more effective he will
need to expand his offensive game and work on his decision making and
ball-handling.

This Liberty
prospect put on a show after some initial hardship and proved he could be a
huge cog in the Crusaders machine. Scoring on floaters and short jumpers,
Yeates provided good dribble penetration and often found the cutter for easy
hoops. Despite his size he is a very aggressive defender.

Aggressive youngster never backed down from his older and
stronger peers and showed he has a bright future as a lead guard. He was very
good on the boards despite his lack of height and used his aggression to power
in some buckets.

Deft lefty stroke continues to be his calling card and an
improved game off the dribble is his focus as of late. He showed some nice
tough drives to the bucket with strong finishes. He plays hard and is tough on
defense which has always been one of his strong points. Working on his
ball-handling and decision making will be vital for his growth.

Hog-eyes newest big man showed a very nice range for an
interior player and a good feel for the game despite never having suited up in
high school till this week. He will need to work on his post skills, catching
the ball and adding a left hand to make his short mid-range a serious weapon.
Love his potential.

He is the quintessential point guard and leader from his
position that always looks for the open man and sets the table with his strong
on ball defense. A very capable outside shooter who will look to add this
weapon to make him more complete. He has a tendency to penetrate to deep and
doesn't have the size to rescue him from potential turnovers.

The Nashville
senior played smart and tough in some games but a bit erratic in others. He is
capable of being a very good player and possesses leadership skills that he is
completely unaware of. Good shooter and can take his defender off the dribble
with ease. His focus is what he needs to work on as he enters his senior
campaign. He can and will do it, I have the utmost confidence in him.

His transformation into a scoring option and more than
capable offensive threat is nothing short of amazing. Hard work and dedication
pay off again and the lefty combo guard is a consistent outside shot away from
getting his school paid for. Aggressive defensively which accounts for a lot of
his scoring on steals and deflections.

One of the better straight athletes in the entire event, Walker has some
basketball skills but refining them is his mission this season. He can score
with relentless offensive effort and a nice short game finish. His decision
making with the ball is suspect and he tends to force the issue at times with entirely
too much dribble. A potential low post beast even at his size, new high school
mentor is a post specialist.

Rising senior showed an aggressive nature and blocked shots
and grabbed tough boards on both ends of the floor. Showed a strong post-up
game and finished inside. Has good length but needs to work on some perimeter
skills for the next level. Ball-handling and a consistent outside shot.

Determined rising senior has a very nice shooting stroke
from deep and plays hard on defense. Large frame will give him some nice inside
opportunities on the high school level this season.

The ace of Brentwood did
nothing to disappoint and proved to be a very capable outside shooter.
Fearless, despite never having played a high school game, Duvall dropped some
floaters and a sweet one and two dribble pull-up. He has good size and once he
learns to play defense he could be very devastating. Loved him.

Improving junior showed a nice ability to hit the open man
and has some very good passing skills. He has improved his outside shooting but
still needs to quicken his release. Fought hard on the boards and is getting in
better basketball shape.

Improving his overall skills as he understands the game with
a very good basketball IQ. His outside shot is solid and he ran the floor well
at the showcase. Adding more options to his offensive game especially off the
dribble will make his outside stroke more effective and give him more scoring
opportunities.