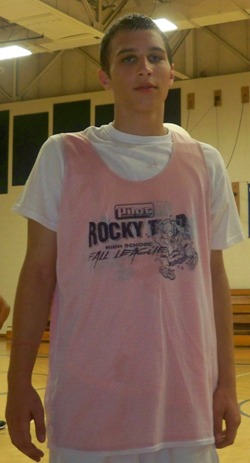 Let me start by saying thanks to everyone who helped make the Vanderbilt showcase a big success, I will start with the SEC and in the following days include the other three conferences in the mix for evaluations.

Much improved shooter and leader can give you scoring and is becoming much more of a point guard presence on the floor. Must watch his fading on his shot and finish his drives to the bucket.

Big strong guard used his size to score on the interior and showed some slick moves on the short perimeter. Outside shot needs fine tuning but isn't bad, showed good vision passing to cutting and open teammates.

Struggled a bit early with his shot but eventually found the groove, has a pass first mentality and always looks for the best option to score, showed a strong resolve to the bucket but must finish those drives to be more effective.

Showed a strong ability to score inside using his bulk and upper body strength, must improve his passing from the interior. Played strong defense and boxes out for tough rebounds, a bit undersized for the post will need to develop a short jumper to increase his scoring opportunities.

Tough youngster was very conscious of help defense and excelled in that phase; lefty stroke showed some feisty moves to the bucket and found he could convert despite contact.

Good rebounding guard scored numerous buckets off put backs, shot the ball well and showed he could finish off the dribble. Defensively works hard and took several charges. Ball handling was good but needs to tighten in traffic.

Incoming freshman showed some very positive instincts on the floor, handled the ball ok and always got himself back on defense. Long despite his height will certainly need to work on his shooting touch.

Young player gave maximum effort on defense and proved to be a very physical defender. He needs to work on his offensive skills to become a true point guard, shooting touch and ball handling in traffic in particular.

Incoming freshman has a nice set of skills that will improve greatly as he gains strength and confidence on the high school level. He will need to become more aware of positioning and catching the entry pass, he rebounds effectively and will stick back the offensive miss, needs to develop an off hand as well. Bright future as he works hard to improve.

Young point guard with good speed and an effective outside shot. Will obviously need to increase his strength to finish plays but he has an above average basketball IQ that will continue to serve him well.

Very good shooter who needs to add some off the dribble access to make his outstanding outside shot more effective, showed a nice penchant for entering the post but didn't move to receive the pass back for the open three. He must improve his defense and footwork.

Very strong and aggressive to the cup, finishes with his lefty flair and uses creative steps to finish despite contact, hard working defender who gets a lot of scoring opportunities with his aggressive ball-hawking. He must work on his outside shooting to increase his best asset which is attacking off the dribble.

Vastly improved his outside shot to where it can be a weapon, plays excessively hard on the interior, snatches boards out of his area and can score with either hand inside. Passes well out of the double team and repositions himself for the carom.

Point guard keeps his head up and is willing to find the open teammate for easy buckets. Ball-handling skills are solid but needs more confidence in his shot, which is not that bad. Tends to force the issue at times and should simply back off and let things develop.

Incoming freshman with good length and a very early understanding of how to play the game, long and blocks shots, grabs rebounds and finds cutting teammates for thankful buckets. Lefty finisher will obviously need to add mass to compete inside but has an above average set of skills for his age group.

Another young incoming player who has some decent handles and can score but lacks strength to finish his plays, has a tendency to watch on offense and must put more of a premium on valuing the ball as a point guard.

Good shooter will need to work on quickening his release slightly, great size for his age group and will battle inside for rebounds. Runs the court well and with improved ball handling could become an effective wing player. Defensively he will need to improve his effort on the ball, boxes out well and isn't afraid to tangle for the rebound.

His game is defense and he is one of the better on-ball defender in the entire showcase, he fights for loose balls and showed he could be an effective passer in both the open court and half court sets. His offensive game needs to come around to become a complete player.

Wonderful team oriented player can stroke the outside shot and was very effective on the penetrate and dish aspect of the half-court game. Nick has good handles and will find the open man, so he can run some point guard for you. He needs to work on his footwork and explosion, increase his foot speed.

Rising senior set for a big final campaign showed a nice stroke and knows how to move without the ball, a lost art in my book. Proved to be a very effective help defender and showed he could pass in the open floor finding cutters for easy buckets.

Showed a very nice outside stroke and attacked the bucket with quickness and decent handles. Shot the ball a bit too much for a point guard and will need to get his teammates more involved in the offense, when he did pass good things always happened. Defensively played hard and created some opportunities for him.

Incredible defender, who ran the floor with passion and blocked shots or disrupted the offensive flow for the opponent when he was out there, plays with complete awareness of his surroundings. He is solid on offense with hard forays to the tin and a decent shooting stroke.

Small point guard with incredible quicks and an unselfish demeanor on the court, Cunningham goes hard to the glass looking for contact and will drop the dime to an open teammate for an easy bucket. Defensively played strong.

Young incoming freshman showed he would attack the boards and keep possessions alive and wasn't afraid to shoot when open. He will need to quicken his release on his shot and improve his technique as well.

Young interior player is well schooled on the box out and gets his fair share of rebounds, can finish inside with solid post moves but lacks foot speed and quickness at this point. Will can finish inside despite contact and as he becomes stronger his confidence will rise and he can add a short mid-range jumper to his inside exploits.

One of the more prolific shooters at the showcase, Clark proved he could stroke with the best of them. He showed good speed from the point in transition and proved he could play in the half court as well. Must apply his leadership skills earlier and more often and make better decisions when he goes to the bucket, must finish those drives or kick to open teammates.

Caught the eye of everyone I had evaluate with his defensive effort and shooting ability, Drew is a fundamentally sound rising senior who makes everyone around him better and showed a penchant for the post entry in the early games. Rebounds well for a guard and will go by you if you underestimate his speed.

Great length and strong inside scoring touch against hapless defenders, Bell showed he could shoot the outside shot and put the ball on the deck and finish inside. He will need to decide which a good and/or bad shot is and get his teammates more involved which in turn will create more opportunities for him.

Inside player who understands how to post-up and boxes out well for rebounds, he proved he could catch and score on the post entry feeds and can knock down a short jumper if left open. Keeps the ball high and is highly effective in the half court game, will need to improve his footwork and lateral skills to help him defend his position better.

Good rebounding guard who can score off the fundamentally sound post move if left inside, improving outside shot and showed he can and will find the open man in the half court set. Tough defender who uses his strength to gain an advantage and create turnovers, must improve his ball handling skills and deep shooting.

Incoming freshman with a nice skill set on both sides of the court, he has good handles and will make the post entry in the half court set. He plays hard defensively and is a very nice off the ball defender filling the passing lanes and creating some havoc, solid basketball IQ must get stronger.

Young point guard who makes his mark on the defensive end of the floor, diving for loose balls and creating havoc for the primary ball handler on the opposing team. He can shoot the open shot but has a tendency to want to make the fancy pass instead of the easy one for an immediate score. The kind of player who helps you win games.

Incoming freshman post player who plays tough defense and boxes out to control rebounds on both ends of the floor. He will go aggressive to the hole from the mid-range and once he develops some strength and footwork improves those drives will be completed.