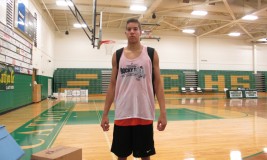 The senior wing signed to play his college basketball at Bryan College and then embarked on a nice scoring spree culminating with a 33 point barrage in a win over Karns.

Yoder was selected to the All-Tournament after helping lead the Panthers to the championship at the Renasant Holiday Tournament in Maryville.

Yoder was steady scoring 11 a win over David Crockett and adding 15 in a quarter-final triumph over Austin East.

He led the scoring with 16 in the title game win over Fulton and for his efforts he has been chosen as the East Tennessee Player of the Week for Week #5.