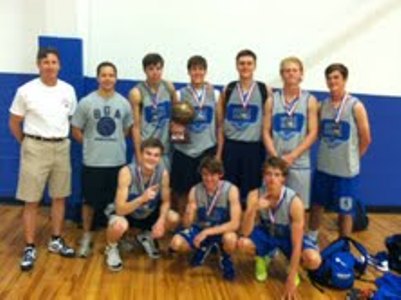 Its all in the name.

Select Basketball made a significant name change this summer
and as Team Xtra Crispy things are starting in the right direction.

TXC got 16 points from Nathan
Moran (BGA) and pulled off a 67-61 overtime victory against Team AGR to capture
the Battle of Franklin crown this past weekend.

Joining Moran in the scoring column were Jacob Adcock (Brentwood) with 13, Zac Wracher (Georgia) with 12 and Slate Rider with 11 points and a team
high 8 caroms.

The victory moves TXC to 10-0 on the summer.

Gliding through the event TXC put on s scoring display in
the semi-finals dropping 105 points on their unfortunate foe.

Wracher led the scoring brigade with 27 followed closely by
Moran with 17. Everyone was invited to the scoring party including Jalen Lawson with 16, Will Groos ()
with 14 and Rider with 10.

Coaches lauded Jack
Bautista () and Sam Johnson (CPA) for
their defensive efforts throughout the championship weekend.