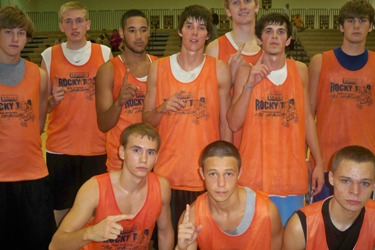 The championship game of the Pilot Rocky Top High School Fall League was an absolute masterpiece and a fine way to finish the festivities.

Thanks to everyone from parents, coaches, college coaches, players and all who helped make our second year our best one to date.

Some might say but the results spoke for themselves.

Anderson County by virtue of point differential after a three-way tie taking on Tri-Cities the team who scored the miracle on hardwood shot a week ago at the buzzer for the championship.

Lonnie McClanahan (Oak Ridge) set the tempo with his aggressive forays to the bucket scoring nine of his 18 points in the first half as both teams came out strong and after Tri-Cities behind some timely scoring from Nathaniel Hughes (Hampton) snatched a 48-40 halftime lead it seemed the pattern was settled, this was going to go down to the wire.

No lead was safe as timely scoring including 9 second half three's, including 4 from Tyrece Irons (Oak Ridge) and 3 from Jon "Big Mac" McCroskey (Gatlinburg-Pittman) kept Anderson County within striking distance.

Every three seemed to be countered by a bucket from the dynamic backcourt duo of Dustin Clarke (North Carolina) and Jordan Cross (Sullivan East), who scored 12 and 10 in the second half respectively.

Dusty Nickles (Jefferson County) converted a tough chance inside and Tri-Cities took the lead for good in the final seconds of the contest.

Clarke led Tri-Cities with 19 points followed closely by Hughes with 14, Cross and Cory Conard (Cosby) with 12 apiece and Nickles with 11.

McClanahan led Anderson County with 18 points followed closely by Irons with 16 and Ethan Abner (Clinton) with 15.

Look for the final scoring leaders tomorrow and the all-league squads on Wednesday.