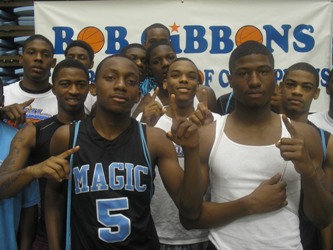 Memphis has always had a special place on the final day of the Bob Gibbons Tournament of Champions.

Teams from the Bluff City have always shined on the Sunday finale and this year was no exception.

The Memphis Magic Elite defeated the Smyrna Stars 74-70 to advance to the championship game of the Select division of the TOC.

Their opponent in the finale, the New England Playaz, was forced to leave due to flight obligations and thus the Magic were awarded the title.

Andre Hollins (White Station) scored 24 points in the win over the Stars including two foul shots late to seal the victory. Tied at 70 with 29 ticks on the clock, "Mighty" Chris Jones (Melrose) drove the lane and was fouled in the act. He converted both shots and after a timely block from Jarekious Bradley (Memphis East), Hollins knocked down his opportunities.

The Magic started playoff action with a 98-88 win over the Nashville Celtics. Hollins was huge in this one scoring 24 points. Jones added 23 and Thomas finished with 14. Nino Johnson (White Station) added 12 points in the win.

In the quarterfinals the Magic tangled with the Worldwide Renegades slipping away with a 66-63 win advancing them to the semi-final win over the Stars.

Jones led the way with 20 markers followed closely by Cameron Golden (Ridgeway) with 15. Thomas added 14 and Bradley 10 in the close win.

For their sterling efforts Jones and Thomas were named to the prestigious All-Tournament team.

I wanted to give quick props to my man, John Ross Glover (USJ) who finished as one of the top 20 scorers in the event for the Nashville Celtics in the 16 and under division with a 20.3 point per game average after three games, narrowly missing a spot on the all-tournament squad.