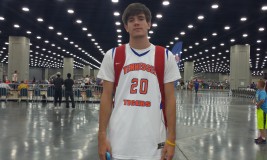 The second live weekend brought teams from Tennessee all over the Southeast with most settling in the Bluegrass state. Lexington and Louisville were ripe with hoops action this past weekend.

In Louisville at the annual Eddie Ford Spring Classic the 17U Tennessee Tigers took to the court with their usual bravado and came away as the runner-up in the Silver Division title game falling to Mercury Elite.

Ross Cummings (Creek Wood) continued his strong early play leading the Tigers at 12 points per game including dropping 12 long bombs during the weekends action. James Boone (Kentucky) despite only playing in two games made his presence felt with double digit scoring in each game.

Jarrell Reeves (Oakland) had a massive championship game with 17 points and supplied double digit scoring the entire weekend including some highlight dunks. Kenny Bunton (Walker Valley) also had a fine tournament rebounding at a high level and finishing with a double digit average in the score books.

On the perimeter the Tigers got workmanlike effort from the trio of Gabe Cummings (Creek Wood), Cannon Campbell (Rossview) and Dequan Summers (Hillwood). Coaches were quick to mention the contributions from newcomer Ethan Hennis (Providence Christian).

Adam Fleming (Loretto) and Brad Allen (Greenbrier) proved be a dynamic duo on the interior, snatching boards and playing tough defense against much bigger players. Matthew Norl (Kenwood) gave his usual non-stop effort and was effective on defense and made some key buckets for the Tigers.

Moving down to the 16 and under division the Tigers finished 2-2 behind some strong performances from Garrett Sanderson (Lipscomb Academy) and Stacy Tindall (West Creek).

Tindall was strong in the final game dropping 22 markers including some spectacular forays to the bucket. Gray Michael (Franklin Classical) also had a fine weekend, the 2018 product is an up and coming prospect with a huge ceiling.

Despite a lack of size the young Tigers fought hard on the glass behind the efforts of C.J. Herbert (Home School) while Michael Ashburn (Macon County) and Brennan Bailey (Ensworth) each had several games showing off their shooting prowess.