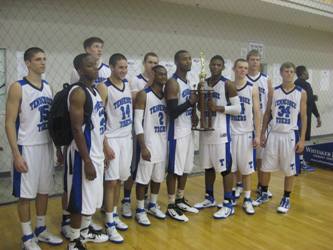 The Tennessee Tigers made the absolute most of their time in the Bluegrass state this Memorial Day weekend winning the 17 and under championship over the Tiger 16 and under crew at the Wildcat Shootout in Lexington.

Will Downey (Ensworth) was at his deep shooting best nailing 17 of 26 three's on the weekend at a 65% clip. Ross Welch (USN) despite playing with a bum ankle was the team's leading scorer in the title game with 13 points.

Nilan Hodge (USN) had a fine tournament including a team high 18 points in the semi-final victory. Casey Smith (Morristown East) played well at the point.

Braylen "Vitamin B" Bennett (Carter) provided energy and defensive presence for the Tigers and averaged a team high 7 boards per game during the weekend. His scoring was on par as well including a 20 point effort in the semi-finals.

Logan Ramsey (Livingston Academy) and Kyle Weldon (Rossview) controlled the key during the event. Ramsey finished with 10 points in the title game and Weldon was very steady on the glass and on defense throughout the weekend.