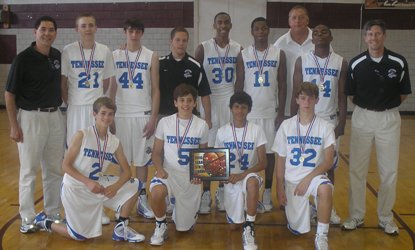 The scene was set in front of a sparse crowd at the old Alcoa High School gymnasium the top two players in their age group were set to tangle for the right to call themselves the champions of the 14 and under state.

Jalen Lindsey (CPA) and Leron Black (White Station) are the participants and the game lived up to all its expectations. Lindsey dropped a game high 16 points and snatched 8 rebounds but his steal of a cross-court pass at the buzzer lifted the Tennessee Tigers past the Memphis War Eagles 45-43 for the championship of the 14 and under state AAU.

The game was tight throughout with Black coming alive in the second half and finishing with 10 points and 9 rebounds. Jerry Johnson (Wooddale) finished with 10 for the War Eagles. Tony Becton (White Station/Ridgeway) finished with 9 points.

In the semi-finals the War Eagles used 10 points from Black to get past their city nemesis the Memphis All-Stars 43-41 and advance to the title game showdown with the Tigers.

Kelvin Bates (Arlington) and Marcus Deanes (CBHS) scored 16 and 12 for the All-Stars.

The Tigers had an easier time in their semi-final win with a 62-39 victory over the Tennessee Battle. Nate Moran (BGA) led the Tigers with 14 points and Allsmiller added 13. Lindsey got into double digits with 10 and Bonds finished with 10 points and 7 assists.

One of the most exciting games of the day turned out to be the Tennessee Team Hustle last second win over God's Chosen Few in the fifth and sixth place game. The Hustle pulled off the win 46-45 on a last second lefty lay-in by John Garrett (Maryville).

Trey Hale (Science Hill) scored a bucket with 1:25 left on the clock to give GCF a 43-42 lead before a diving effort from Cody Carroll (Maryville) forced a turnover with 41 second left on the clock. Garrett hit a short jumper to forge the Hustle ahead 44-43 before Emani Miller (Austin East) scored a tough driving lay-in to give GCF the lead again 45-44 with little time remaining before the winning shot by Garrett.

The Top 10 scoring efforts from the weekend were as follows:

Andrew Cowie dropped 27 points in a 66-61 win over the Music City Jags.

Emmanuel "Mann" Smith (Oakland) scored 25 in a loss to the Tennessee Battle.

Black had a pair of 21 point efforts against the Music City Jags and the Battle.

Lindsey also dangled a pair of 21 point efforts against the All-Stars and the Hustle.

Rasheed Gordon (Antioch) and Juanye Smith (Ensworth) both scored 18 in the loss to the Tennessee Team Hustle.

Here is a list of the top 25 players from the event. They will be listed in alphabetical order and the school selections are what were told to me by either the player or the coach so they are subject to change.

Top 25 Players at the Event