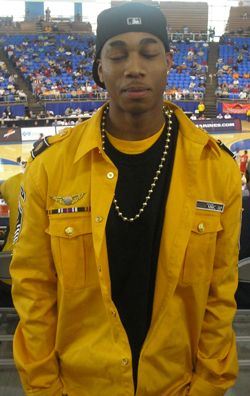 "The General" was not asleep during the making of this photo, I am simply not very talented with a camera.

Unlike me talent is one thing Tevin Crayton (Humboldt) has an abundance of.

After leading his Humboldt squad to an undefeated regular season and a spot in the state tournament, Crayton set off to find a worthy suitor for his hoops talents on the next level.

After testing the waters for a few weeks, the talented 6'6 athlete chose to become a Maroon Tiger and will make his home the next four years in Atlanta, attending Morehouse College.

Morehouse in a member of DII and plays in the Southern Intercollegiate Athletic Conference and is coached by Grady Brewer.

As a worthy district foe the past few seasons for Crayton, Russell Avery (Lake County) also was blessed with talent to continue his career at the next level.

Jackson State plays in the TJCAA.

The 6'5 Avery has a load of potential and his new coach is exstatic about his empending arrival to begin his quest for D1 hoops in the future.

I look for both guys to have outstanding careers on the next level.