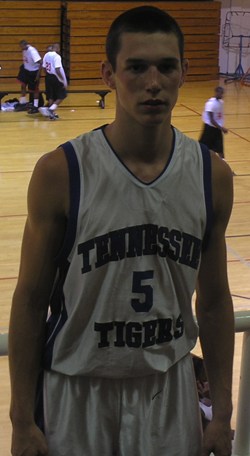 Under the national radar is a good place to be come July.

Knowing enough about your squad to be curious brings the coaches around to get a good look at what they have heard.

The Tennessee Tigers have a few prospects that will invite the onlookers with the logo emblazoned attire to courtside.

Cory Stanton (Springfield) is embarking on his first real run at summer love. The talented rising senior guard has the opportunity to make a big name for himself and become part of the consciousness of coaches who recruit the state of Tennessee. He will recieve alot of interest this summer.

Carter Sanderson (Lipscomb) will have the opportunity to play against some of the best athletes in the nation and the shooting star will make all take notice that he is more than just a shooter, bet on it.

Blake Bell (Lipscomb), David Sanders (MLK), Matthew Powell (Lipscomb),Mykal Titlow (Greenback), Taylor Cummings (MLK) and Desmond Johnson (Overton) are the glue players who set the tone for the Tigers. Be it tough defense, a timely shot or simply making a play the guys are the difference between winning and losing.

On the interior the Tigers boast a very intriguing prospect or two. Michael Bradley (Tyner Academy) catches the imagination because he's 6'9 so coaches will come to watch. The emerging big man has secured a few offers but this could be his epic comeuppance with a solid showing against some of the better bigs in the nation. Reggie Gilmore (Tyner Academy) is long and athletic. His raw skills and never quit attitude make him attractive as he polishes his offensive game. Calvin Settles (Ensworth) is a big body who can spell either big man and score off the dribble.