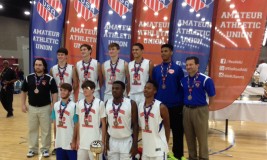 This is how you finish up a fine summer.

The Tennessee Tigers 16 and under squad has been one of the top teams in the age group in our state this summer.

The Tigers did not disappoint in Louisville at the 16 and under AAU Nationals coming home with a 3rd place finish.

The Tigers, despite bouts of illness and injuries, fought hard advancing to the semi-finals against EYBL member the Arkansas Wings Elite.

A close game late the Tigers came up short but closed the event strong with a victory in the third place game.

Hollander had another fine event, shaking off a finger injury and leading the team with a 17 point per game average including a breakout 29 point spot in early pool play action.

Cummings, who raised his stock more than any other Tiger this summer, came in at 11 per game for a very balanced scoring squad. His 22 point effort, with 6 threes was talked about by onlookers.

Bunton was lauded for his defensive effort against much larger players but the rising junior still managed to average 11 point per contest during the event.

Hewitt continues to battle on the interior despite giving up several inches to whomever he is paired against. He used his athleticism and creative lefty scoring tricks to finish in double digits with 10 points per game.

Allen also finished averaging around 10 markers per game with an array of short hooks and deep threes.

Keaton Dotson (Station Camp) played his best tournament to date, getting a huge 10 point effort in the 3rd place game.

Cannon Campbell (Rossview) and Gabe Cummings (Creek Wood) were instrumental in the success of the Tigers running the show without receiving all the scoring praise. There efforts will not go unnoticed by their coaches and this writer alike.

Coaches added that the contributions of two newcomers P.J. Grooms (Alabama) and C.J. Jones (Alabama) were huge for the depth and success of the Tigers this weekend. Grooms was lauded for his defensive effort and ice water efforts at the foul line while Jones was also a defensive stalwart for the Tigers.