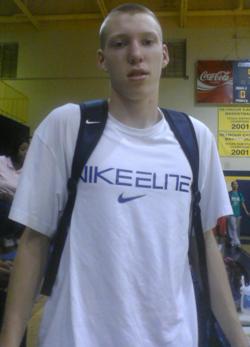 "Welcome to Atlanta where the playas play",  very appropriate as many of the country's top 15 and 16 years old squads descended on the ATL for the Nike Memorial Day Event.

Team Nashville came to the city with their guns blazing and played some serious hoops dimming the Georgia Stars 63-58 behind 15 markers from Cornelius Elder (Ensworth).

The exciting rising sophomore made a huge splash among the people in attendance with his combination of ball skills, scoring ability and leadership attributes.

Elder continued his scoring ways dropping 14 in a win over the Mississippi Phenoms, Dial and William Powell (Alabama) added 12 apiece.

An awesome showing for the Team Nashville crew, Elder has begun the ascendance into the next level and the continued improvement of Dial, Robinson and Craig give this group an outstanding outlook with July right on the horizon.

Staying in the Peach State, the Tennessee Travelers 16 and under squad battled hard losing some tough games and grabbing a win against the Memphis Bearcats.

Braylen "Vitamin B" Bennett (Carter) was praised for his efforts over the weekend. The 6'4 rising junior scored from inside or out and played with passion and energy for the duration of the event.

Montrae Williams (Spring Hill) was sighted for his shooting prowess and both point guards, Jack "The Natural" Montague (Brentwood) and Cordell James (McCallie), were lauded for their consistency and leadership over the weekend.

The Memphis YOMCA had a solid weekend finishing with a 3 and 1 record in the 16 and under division, despite playing with a roster primarily made up of 15 and under talent.

Sam Craft (Craigmont) and Markel Crawford (Melrose) proved to be the scoring leaders for the Y with a consistent effort throughout the entire session. Demetrius Dyson (Brighton) was also lauded for his efforts on the hardwood.

Bumping down to the 15 and under division, the Tennessee Travelers got off to a bright start slipping past a very good Jackson Tigers squad 66-65 before a 34 point blow-out win in their second contest.

The Travs would finish 3-0 in early action before falling to the Baltimore Elite. Will Adams (Science Hill) was solid the entire event from the point guard spot. Leading the team on the offensive end and playing hard on the ball defense on the defensive side.

Alex Fountain (Wartburg Central) played inspired scoring from mid-range and blocking some shots and giving consistent minutes throughout the tourney.

Kenny Dean (Alcoa) continued his blue collar work on the defensive side of the ball. Grabbing tough boards and giving his team energy and inspiration.