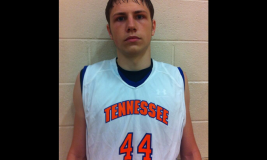 Representation at the AAU Super Showcase and the AAU Nationals was plentiful for the state of Tennessee with several teams ending their collective summers on a very high note.

One of the few teams that participated in both events. 6 days, 18 courts and 14 games constituted the week for the boys from the Music City.

In the Super Showcase the Flood finished second in their pool falling in a close game to EYBL member Howard Pulley and the NYC Jaguars before closing hard with a 77-50 win over the Kentucky Metros.

In the silver bracket the Flood drowned the Wisconsin Academy 57-49 behind 15 markers from Chase Nappier (Lighthouse Christian) and Garrison Mathews (Franklin) then fell in a close battle to the Playground Elite 73-71 with Mathews going off for 29 markers.

Mathews had a very nice showing and solidified his membership on several college coaches recruiting lists. Nappier and his clone Braxton Nappier (Lighthouse Christian) were defensive stalwarts from beginning to end, causing disruption and havoc with their intensity and constant motor.

Coaches were quick to point out the contributions from several players including Perry Cooper (Ravenwood), who's timely shooting kept the Flood in several games and James Dutton (Franklin), who spelled the starters and gave quality minutes on the interior.

On the perimeter, Javel Gillespie (LaVergne) had numerous game with multiple deep threes and Donovan Donaldson (Hillsboro), who played both back-court spots and was a leader on the offensive end of the floor.

Cameron Marsh (Stewart's Creek) was lauded by coaches for his consistent effort throughout the event.

In the AAU Nationals the Flood got down to business in the Classic Division winning six straight games and closing with a 67-64 overtime triumph against the Richmond Squires.

The Tigers started off with a roar winning their pool games against Team Michigan and Metro Boston in the 17 and under AAU Nationals.

Dakota Quinn (Davidson Academy) continues to pile up offers and was key in the Tigers success in Louisville.

John Payne (Goodpasture) was at his best dropping a 29 point effort in the pool win over the Metro Boston squad, while Micah Davis (CPA) concluded a very good summer averaging 11 points per game for the event.

Coaches applauded the efforts of two newcomers from Alabama, P.J. Grooms (Alabama) and C.J. Jones (Alabama), who scored 18 and 20 respectively in the opening pool play victory.

The Bobcats found themselves in the AAU Super Showcase staring at their first round opponent EYBL member the St. Louis Eagles.

When it was all set and done, Peyton Woods (Kentucky) dropped 24 and John Bryant (Jefferson County) added 17 as the Bobcats fought and scrapped their way into a 69-65 overtime classic and victory.

The scheduling committee was not kind to the Bobcats as another member of the powerful EYBL community, The Jackson Tigers, would be their second pool play opponent.

Woods led the scoring with 16 while Fulkerson and Cade Crosland (White County) each finished with 9 as the Bobcats fell 76-53.

Club Ohio felt the clawing of the Bobcat rage in the final pool effort to the tune of 60-51 behind 20 from Blevins and 15 from Woods. Bryant finished with 10 points and 8 boards while Fulkerson came up just short of a double/double with 9 markers and 9 caroms.

Taking the #2 seed from pool play the Bobcats advanced to the Silver Division and despite a valiant comeback from a double digit deficit could not hold off the bigger and stronger Team Work crew from Ohio. Woods led all scorers with 22 while Crosland hit several deep threes and finished with 14.

The Celtics came into the event a bit shorthanded with several key injuries keeping players from attending.

Ricky Dunnaway (Oakland) turned several heads with his outside marksmanship while Kyler Douglas (Haywood County) made the most of his scoring options with several 20 point finishes.

The Celtics turned some heads with a nice win over EYBL member BABC with super efforts from Dunnaway, Douglas, Will Shelton (Hardin County) and Grant Teichmann (Brentwood).

Shelton closed his summer on a high note with his newfound shooting stroke and his ability to use his size and toughness on both ends of the floor. Look for big things from this young man.

Teichmann proved he could handle the pressure of quicker and stronger guards and found time to knock down several shots including his new and improved patented runner.

The Tennessee Panthers closed the July period with a 1-3 finish in Louisville but concluded a very productive summer that saw them close with a 30-9 record including 4 tourney championships and 2 runner-up crowns.

The Panters started strong with a nice pool play win over the Illinois Future behind 21 from Austin Douglas (Cheatham County) and 12 apiece from Kyree Elder (Cane Ridge) and Chico Plunkett (Creek Wood).

Plunkett was high man in their second pool play game a loss to King James.

Marquis Davis (LaVergne) notched 13 points and dished out 8 assists as the Panthers fell to the Louisville Magic in bracket action. Plunkett, Douglas and West added 11 each.

Dansoh had another big game in the Magic loss with 18 points and 16 caroms.