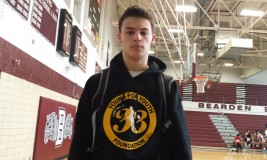 The playoffs are upon us and as is usual this time of the year I like to put forth my All-Region teams. I have gotten some input from coaches and I have been to over 200 games this season and seen over 130 different teams. Hope you enjoy. These selections are based on the regular season. Each team will consist of an MVP and 9 other members, as well as; 5 to 8 honorable mention selections. Players are listed in no particular order on the All-Region team.