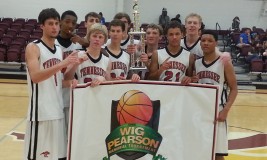 While I spent my time covering the 14 and under state tournament this past weekend some other thigs were happening all around the Southeast.

Lets catch up on what went down.

Revenge stuck in the minds of the 16 and under Tennessee Panthers as they dropped an early pool game hoping to find their way back into the title game for another shot at redemption.

The Panthers led comfortably for most of the game before a late Warrior surge brought them to within four.

Austin Kirby (Hendersonville) took care of business at the charity stripe and the Panthers cruised home to victory.

Joining Douglas in the scoring column was Ross Plunkett (Creek Wood) with 17 and Preston Brown (Hendersonville) with 11.

The Panthers got off on the right foot early taking their pool play opener 73-41 over the Madison Tigers.

The aforementioned Warriors spoiled the unbeaten streak but turnovers and missed foul shots contributed to the 80-76 loss.

Douglas fired in 19 as the Panthers rebounded with an 84-59 win over Team Vigilance Black. Plunkett added 12 while Austin Brown (Mt. Juliet) and Marquis Davis (LaVergne) chipped in with 11 each.

In bracket play more of the same for Douglas as he notched 18 in a 76-42 win over Team Vigilance. Brown chipped in with 14 and Jake West (Hendersonville) contributed with 13.

Coaches were quick to laud the outstanding board work of Brandon Dansoh (Cane Ridge).

The Music City Heat used 15 markers from DaQuan Summers (Hillwood) and Patrick Murphy (Independence) to slide past their program counterparts the Music City Stars 57-53 and bring home the title in the 16U division at the 10th annual Warrior Rumble.

The Kings advanced to the title game with a 58-54 win over the Murfreesboro All-Stars while the Stars edged the Atlanta Flash 60-52 for their spot in the 'ship.

A close game throughout the Heat secured the lead for good on a deep three from Murphy with under 9 second left on the game clock.

Thomas Booker (East Nashville) and JaVaughn Craig (McCallie) scored 20 and 18 for the Stars in the loss.

Isaiah Blacksmith (East Nashville) was big on the glass for the Heat snatching 10 caroms in the title game.

Evin Heskje (Homeschool) was lauded for his floor leadership leading the team to the title run.

The Chattanooga Elite-Navy represented Tennessee with a solid 2-2 finish at the Future 150 Showcase in Birmingham.

The Elite started slow with an opening game loss to the Alabama Select but bounced back taking one from The Family out of Arkansas 51-24.

The Alabama Hornets got a taste of the best the Elite had to offer with a 51-34 drubbing before falling to the Atlanta Xpress 55-45.

Keyshawn Bradley (Hixson) was the top dog in the scoring column averaging around 18 per game for the four game stretch.

Jamaal Herman (Brainerd) had a nice event averaging a double/double in points and boards while Barrett Pope (Ooltewah) and Daizen Taylor (Ooltewah) were sighted for their scoring and defensive production throughout the event.