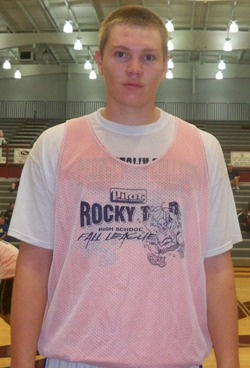 Two of the best teams on the West Coast ran into the Tennessee buzzsaw and saw their Real Deal dreams come to an end.

The Tennessee Ice lead off first with a 65-61 victory over Belmont Shores and national Top 10 player Grant Jerrett in the finale of pool play action. The Ice used the victory to finish second in pool play and advance to the championship bracket.

The Ice pushed ahead to a big lead on some outstanding outside shooting from Ben Arnold (Cumberland Gap), who would finish with 22 points and Hunter Leveau (Science Hill), who added 14 markers for the Ice.

Later in the evening in the opening round of championship bracket action the Mid-State Ballerz East welcomed the Compton Magic into the Jack Stephens Center. The Magic boasted the nation's 2nd ranked player in 7'0 Isaiah Austin and a pair of very highly touted and top 50 ranked guards in Gabe York and Nino Jackson.

The ink mattered not to the Ballerz and with a roster of only six the crew split up the scoring evenly and knocked down key threes at crucial times and once they seized a lead converted foul shots and held on for one of the tournaments biggest upsets and an 82-80 victory.

Cody Malicoat (Jellico) added 8 points and snatched some key rebounds down the stretch for the Ballerz.

We will have complete coverage of how most everyone finished at the Real Deal on Monday, for those teams we could not contact please let me know how you finished and which players stood out for your squad.