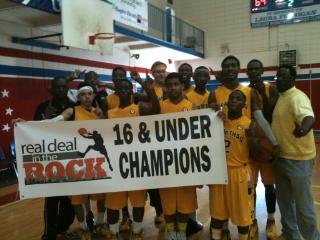 Proving to all the so-called recruiting pundits they are one of the best 16 and under squads in the country has become first and foremost on the minds of the players for Team Thad.

The 5-0 series sweep moves Team Thad to 24-0 on the young season proving they are among the elite squads in all of the country in this age group.

Over half of their victories this season have come while playing up an age group.

The win over the Illinois Mercury Elite was led by the usual suspects consisting of big time national talent Leron Black (White Station) and a host of names that will soon become part of the recruiting vernacular, not only in this state but all over the Southeast.

Anton Beard (Arkansas) might be the best player in his class in the state. His play was highlighted by some other outstanding guard play from the dynamic Team Thad duo of C.J. Anderson (Arlington) and Chris Chiozza (Bartlett).

Anderson turned many heads with his defensive effort while Chiozza is old school John Stockton/Jason Kidd like precision on his passing and leadership plus the little fella can score if needed.

Team Thad can move Black anywhere on the perimeter when their big guys get rolling including Marcanious Hyman (Whitehaven), Fatodd Lewis (Raleigh-Egypt) and LaDarius Coleman (Craigmont).

Deonte Thomas (FACS) was a welcome addition for Team Thad in his first event of the summer schedule.

This squad will only get better and remember you heard it here first..........sit back and watch them go.

Staying in the Platinum II Division the Tennessee Chosen Few made quite a stir soundly thrashing through their pool and getting a monumental win over highly regarded Dream Vision en route to a Final Eight finish in the tourney.

Coaches applauded the efforts of Luke Matthews (Stone Memorial) during this event.

The Tennessee Playmakers continued to play solid on the hardwood finishing among the Final 8 losing to eventual champion Team Thad 62-40.

Christian Lynn (Goodpasture) and Zach Hodksins (Ravenwood) continued to lead the Playmakers in scoring while Anotrain Moore (Hillsboro) was a solid force on the glass and blocking shots. Anthony Banks (Lancaster Christian) provided the leadership and made sure the scorers got to do their jobs.

Despite not winning their pool this weekend the Select Basketball took a different route to a fun finish as they wrapped up the consolation bracket with a victory over X-Factor in the title contest.

Select defeated the Arkansas Wolves and the Kansas City Eagles to get to the consolation championship.

Finally in the 15 and under division Team Thad also went ahead and brought home the title to Memphis behind continued superb effort from Marlon Hunter (Melrose) and Deonte Fitzpatrick (Melrose).