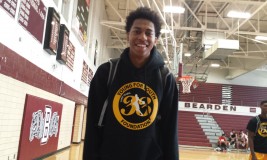 Team Thad finishes 3-1 moving their record in the Humble Division to 8-4 qualifying them for a spot at the UAA Finals in July at the awesome Suwanee Sports Academy Complex in Atlanta.

Kansas commit LaGerald Vick (Douglass) let forth his newfound confidence scoring 25 markers and snatching 10 boards as Team Thad snuck past Supreme Court 67-65 in the opener of Session III of the UAA in New York. Jordan Bone (Ensworth) added 10 in the win.

A battle with the Indy Hoosiers came down to crunch time as Team Thad moved past the Hoosier crew 86-85 behind 28 from Vick and 11 from Micah Thomas (Briarcrest).

Set the bar high and 3-0 it is as Team Thad squeezes the Juice All-Stars to the tune of 94-60 with a foursome of double digits scorers including Vick with 23, Mikkel Normant (Fayette-Ware) with 14, Nathan Hoover (Arlington) with 13 and Nick Marshall (Lexington) with 11.

Down in the 16 and under division things off to a good start as Carlos Marshall (Southwind) dropped 23 and Team Thad drove past Sports U 52-50.

Harris was at it again scoring 20 as Team Thad got back on the winning track blasting Team Charlotte 68-43. Dedric Boyd (Haywood) added 10 while Monyyong was massive scoring 9 boards, snatching 13 caroms and blocking 7 shots.

Harris led the scoring brigade once again with 24 as Team Thad closed Session III with a 70-50 drubbing of WeR1. Marshall added 14 points and 10 boards to the cause.

The Team Thad 16U finishes at 9-3 good for second place.