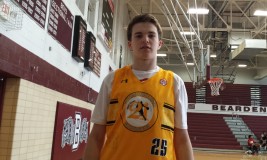 The opening leg of the Under Armour Association tipped off this past weekend in New Orleans.

Team Thad hit an early roadblock with a talented Canada Elite suffering their only setback of the weekend 74-69. Mikkel Normant (Fayette-Ware) had a big game scoring 24 markers for the Memphis crew. Nathan Hoover (Arlington) added 15 in the loss.

Marshall would lead a balanced scoring attack with 15 as Team Thad concluded the event with a gripping 71-61 win over Team Breakdown. Vick added 12 while Hoover and Hughes chipped in with 11 each.

Moving to the 16 and under division Team Thad cruised through the competition with an easy win, two one-point gems and a close call to finish the weekend at 4-0.

Dedric Boyd (Haywood) continued his sterling play from the state tournament leading the Team Thad charge with 19 in a 63-55 drubbing of the Florida Vipers. Camren Taylor (Lausanne) and Ruot Monyyong (White's Creek) scored 12 and 11 respectively for the winners.

Monyyong took another huge step forward with 14 points and 13 boards as Team Thad slipped past the K.C. Run GMC 56-55. Boyd added 13, Carlos Marshall (Southwind) chipped in with 12 and Tyler Harris (Ridgeway) finished with 11.

Marshall had the hot hand with 21 as Team Thad took another close one 60-59 over D.C. Premier. Harris chipped in with 19 while Boyd added 10.

Harris, a Class of 2018 member, scored 19 and Marshall added 18 as Team Thad closed things down with a 58-50 win over the Atlanta Xpress.

In the 15 and under league Team Thad was at the top of the heap finishing 3-1 in a very competitive situation.

Rayshard Williams (Lausanne) was the lone member of the double digit club with 16 as Team Thad moved to 2-0 with an easy 52-41 win over WER1.

One of the biggest teams in the association the Atlanta Xpress found a way to pull out a win to the tune of 59-53. Quinton Williams (Bartlett) led Thad with 14 while Brown added 13 points and 10 boards.

Brown is a beast on the glass especially at this age. His body is above average for this division and he goes after missed shots like a seasoned veteran. Very big upside for this youngster.

In the finale, Golday led the scoring with 18 as Team Thad dispatched of the SYF Players 80-63 to close the event at 3-1.

Team Thad will head to Louisville for the next live period and the second leg of the Under Armour Association.