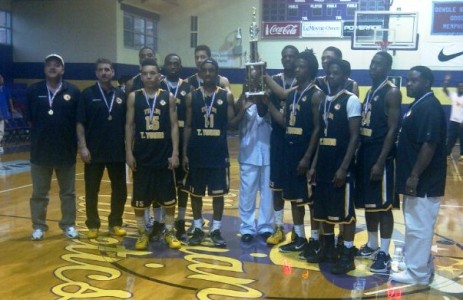 Just as we suspected the Class of 2013 was going to be one of the strongest we have had in this state in some time, the victories continue to pile up for teams from all four corners of the Volunteer state.

The Tennessee Chosen Few, playing with only 7 players, finished 5-0 and brought home the trophy from the 4th annual Brand Jordan Invitational in Charlotte this past weekend.

TCF was "en-fuego" from the three all tournament long including a ridiculous 17 of 21 in the semi-final victory.

Stetson Moore (Knoxville Halls) was the leader of the shooting brigade netting 17 of his own in the five games.

Guard play and shooting were the stuff legends were made of for TCF. Will Adams (Science Hill) was brilliant controlling the games and finding his hot shooters.

Shannon Hale (North Carolina) made his TCF debut and was vital in the team's success on both ends of the floor.

The Storm rolled down to Atlanta looking to continue their very successful inaugural season with a trip to the Converse Elite Invitational.

Pool play was kind as the Storm finished 3-0 but bracket action would be their undoing.

Victim #2, the Power Stroke of Alabama fell 56-36 behind a balanced attack led by Reggie Upshaw (Baylor) with 10 markers.

A bit tougher but same outcome as the Storm bested the Atlanta Knicks 61-57 with Upshaw providing a beastly 23 points and 20 boards. D.J. Prather (Georgia) added 12 and D.J. Bowles (Cleveland) finished with 10. Antonio Jackson (Ooltewah) finished with a sturdy 10 assists.

The Southern Stampede, a Nike EYBL squad, ended the Storms tourney with a 71-48 defeat. Upshaw and Bowles scored 11 and 10 in the tough loss.

16 and Under AAU State Tournament

The Tennessee Playmakers finished 2-2 and grabbed third place at the 16 and under state tournament. Things started strong with a 63-55 win over the Clarksville Stars. Zach Hodskins (Ravenwood) led the squad with 19 points and his running mate Christian Lynn (Goodpasture) added 18. Anthony Banks (Lancaster Christian) had 14 points and 8 dimes while Antorian Moore (Hillsboro) stuffed the stat sheets with 8 points, 9 boards and 8 blocks.

Team Penny was the second game opponent and after leading at the half the Playmakers couldn't avoid the dreaded turnover bug and fell to the Memphis crew 62-53. Hodskins led with 18 and Lynn added 17. Moore almost got his double/double with 8 points and 10 boards.

The top seeded Memphis Saints got a battle from the Playmakers but came up short at the end 48-44 in a low scoring affair. Keying on Lynn, who still finished with 18, the Saints caused turnovers and havoc in the tight victory.

The Playmakers closed strong with a big win over the Tennessee Thunder 74-51. Balance was the scoring mantra as Jamonte Davis (Kentucky) led with 15, Lynn added 14, Moore pitched in with 11, Ikenna Anyaebugnam (Cane Ridge) and Hodskins added 10 in the victory.

Jonathan Starks (Brighton) was a man among boys scoring 25 points in the championship game victory over the Memphis Phenoms leading Team Thad to a 69-53 win and the title of champions of the 17 and under AAU state title in Tennessee.

Team Thad finished 5-0 raising their season record to 25-4 with victories over the Chattanooga Steam, Tennessee Thunder, J-Town Warriors and two against the Phenoms.

Playing up with the 17's, Team Thad got huge contributions from Chris Chiozza (Bartlett) and Marcanius Hyman (Whitehaven).

Moses Harper (Brighton) and Ashton Moore (Arlington) were lauded for their efforts during the tournament as well.