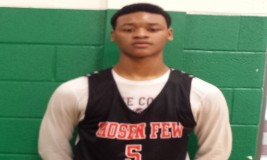 Destination Pittsburgh for the Hoop Group Jam Fest and opening round of the newly formed Under Armour Association Grassroots Basketball Circuit.

This event would feature teams from the newly formed UAA and others competing for the championship of the Pittsburgh Jam Fest.

The members of the association would enter the tournament in the quarter-final rounds and advance accordingly.

Team Thad, the only team from Tennessee in the UAA, opened up action on Friday night with a win over We R 1 74-60. Jordon Varnado (Haywood) made the most of his appearance in the Team Thad gold and white dropping 17 markers and snatching 15 boards in the win. LaGerald Vick (Douglas) added 16 to the cause.

Entering bracket play Team Thad coasted past Team Patterson 83-59 behind 20 from Andrew Fleming (Virginia). Joining him in the scorebook were Naba Echols (Mitchell) and Varnado with 11 apiece.

Fleming led with 21 and Vick contributed 17 but Team Thad ran into a buzz saw known as New Heights falling 88-70 thus dropping them into the Sweet 16 losers bracket and a date with the Carolina Wolves.

Varnado was huge in this one scoring 24 and grabbing 13 caroms while Fleming, who scored 12, knocked down late foul shots to preserve the 75-74 triumph. Jalen Fisher (Bolton) contributed 14 points while Keith Wilson (Memphis Overton) added 10.

Closing out the event with a 4-1 record, Team Thad disposed of the Jersey Shore Warriors 59-57 behind 12 from Fleming and 11 from Varnado.

Making some noise of their own the Tennessee Chosen Few got off to a hot start winning over the King Street Kings behind the solid play of Kelvin Jackson (Fulton) and Jorden Bowden (Carter).

The loss dropped them into the Platinum Division losers bracket where they fought hard but fell to the Philly Ballhawks before rebounding and closing on a big note winning against Virginia Elite to finish the weekend at 2-2.

Coaches were not hesitant to point out the major contributions of several players including Yosmond Fenderson (Fulton), who is coming back after missing most of the high school season with a transfer, and Devin Stuart (Dobyns-Bennett).