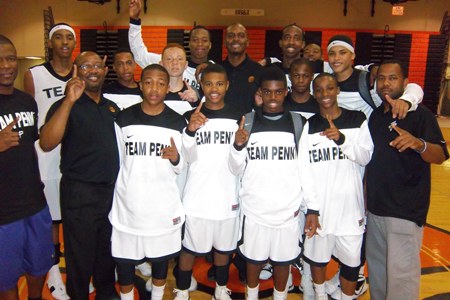 The future of the game is always a subject of debate and a topic which causes grown-ups to spurt negatively about a variety of subjects when referring to the hoops scene.

The future of the game was on major display this weekend at Pigeon Forge High School as the 14 and Under AAU state tournament took to the sleepy vacation town with gusto.

Please keep in mind these young men may not know yet exactly which high school they will attend in the fall but these were the selections given to us by the players or coaches of the respective teams.

Team Penny (Yes that Penny) bested fellow Memphis cohort The War Eagles 64-59 to capture the title as king of the Class of 2016, wow 2016 that sounds almost futuristic to me.

Penny led 34-21 at the half but a furious rally led by talented backcourt prospect Jaylen Fisher (Bartlett), who finished with a game high 22 points, closed the gap to 46-41 after 3 quarters.

The War Eagles spent their effort on the comeback and Team Penny made foul shots down the stretch as they brought home the ‘ship.

Dillon Mitchell (White Station) finished with 9 points for the War Eagles but had an outstanding weekend with his shooting and scoring ability.

In the 3rd and 4th place contest a third Memphis squad, Team Thad got 18 points from Demarcus Johnson (White Station) and the triumvirate of Vince Gray (Arlington), Micah Thomas (Mississippi) and Javion Hamlett (Whitehaven) finished with 12 points each as the Bluff City crew held off a determined Nashville Celtics squad 73-68.

In the semi-final games, Team Penny got its usual balanced scoring with Hill dropping 11 and Lawson adding 9 as they got past Team Thad 52-40. Thomas led Team Thad with 12 and Johnson added 8 in the tough loss.

In one of the weekends wildest games the War Eagles used a 15-3 fourth quarter advantage to run away with a 70-54 victory over the Nashville Celtics. The game looked like a War Eagles win early as they cruised to a 28-19 opening stanza lead but a quick 13-0 Celtic run led by Ross "Chico" Plunkett (Creek Wood) quickly got the margin back to normal.

Leading only 55-51 after 3 quarters of action the War Eagles turned to their backcourt tandem of Mitchell and Fisher and parlayed this into a trip to the title game. Mitchell led the Eagles with 20 while Fisher added 15. Mark French (Briarcrest) added 10 in the win.

Plunkett was outstanding scoring a game high 25 points on a variety of threes, clever drives to the hoop and crazy finishes in traffic. Upshaw and Gabe Cummings (Creek Wood) added 10 points apiece for the Celtics.

In the 5th and 6th place contest the Tennessee Elite bested the Tennessee Panthers 57-53. Devin Harper (Karns) led Elite with 17 points. Joining him in the scoring column was Joe Kimber (Fulton) with 16.

Marquis Davis (Antioch) led the Panthers with 12 while Austin Douglas (Cheatham County) finished with 10 points in the loss.

Carter's 28 points was the scoring high for the tournament. The cat quick youngster also tallied a 26 point effort in pool play.

Stay tuned as I will cover the teams from the 14 and under state with stories on Tuesday and Wednesday. On Thursday I will have my list of the top 25-30 players at the event.