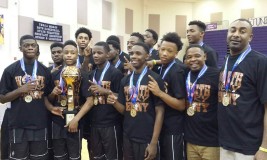 Team Penny cruised their way through some tough road blocks finishing 7-0 and bringing home the 15U AAU National Title.

Balanced scoring was the key as Team Penny had a different leading scorer in each of the seven wins during the event.

Team Penny, coached by Lamarcus Golden, got sterling play from everyone especially at the guard positions where Alex Lomax (Memphis East) staked his claim as the best young guard in the city. Mark Freeman (Southwind) joined the fray late after showing off his skills at the EYBL but was instrumental down the stretch for the Memphis crew. Taelyr Gatlin (Brighton) had another outstanding tournament on both sides of the floor. His defensive efforts were lauded loudly by the coaching staff.

Defensively Team Penny separated themselves from the field with workmanlike efforts from Jordan Johnson (Memphis Central), Kevin McMahon (Hamilton) and Martell Brooks (Hamilton). Brooks also provided points and was one of the aforementioned leading game scorers for Team Penny.

T.J. Moss (Memphis East) arrived late with Freeman and showed why he is one of the best shooters in the Class of 2018 with some timely bombs in the tougher bracket contests down the stretch.

Coaches were quick to point out the massive contributions of Ryan Boyce (Houston), who was equally as effective on offense and defense. His length and motor gives him an advantage on the glass and he fights and claws for second chances while his smooth gate and length make him a terror on offense and a nightmare match-up for opponents.

Despite the balance in the offense, Chandler Lawson (Memphis East) undoubtedly caught the eye of everyone in attendance. The Class of 2019 top dawg showed he could hold his own with the older boys and was a huge factor in helping bring the trophy back to the Bluff City.

Team Penny 15U currently stands at 44-4 for the season with three of those losses coming to teams from the 16U age division.