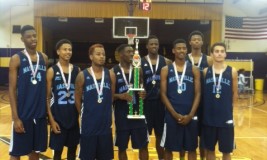 A program first believe it or not.

Team Nashville put together 5 straight wins, taking each game by a wide margin, and capturing the 17 and under AAU state championships in Memphis.

Team Nashville rolled through the event taking out their early frustrations on the Memphis Royals 70-36 behind 19 from Ladarious Chester (Florida) and 11 from shooting star William Alexander (Maplewood).

The Memphis Bucks felt the Team Nashville onslaught to the tune of 78-29 on balanced scoring led by James McPherson (Brentwood) with 13, Kevonte Davis (Hillsboro) with 12 and finally Leon Howard (Nashville Overton) getting 11.

Alexander led the charge with 17 as Team Nashville moved to 3-0 with a 62-42 win over the Tennessee Tigers. Tripp Davis (Lighthouse Christian) added 12 and K. Davis finished with 10.

Alexander continued his torrid scoring leading the charge in the semi-finals with a big 20 point win over the Tennessee Extreme Playmakers. Jylan Washington (Stewart's Creek) was outstanding in the win as well.

In the title game the Memphis Royals again felt the wrath of the boys from the Music City by the score of 66-47.

Howard and McPherson were lauded for their outstanding efforts controlling tempo and getting their teammates involved. Alexander shot lights out while Chester was a beast defensively.

Yalen Reed (Station Camp) provided much needed rebounding and shot blocking before sustaining a hand injury. The Davis boys and Washington played with effort and emotion.