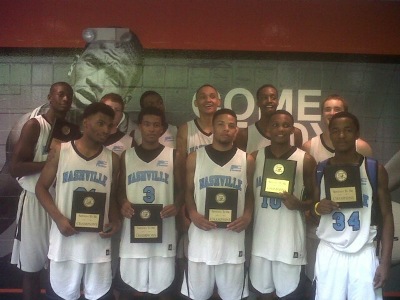 Team Nashville got their summer run off to an outstanding start dominating play at the 2nd annual Tennessee HoopFest capturing the title in both the 17 and 16 and under age brackets.

Team Nashville defeated the Colorado Force to win the 16 and under title behind the steady work of Darius Thompson (Blackman). The slender rising junior was the teams leading scorer the entire weekend and made believers of many onlookers with his ability to put the ball in the bucket.

Ivan Alsup (Nashville Overton) was vital for the team's success as he controlled the tempo and got everyone into their particular spots. Alsup had numerous assists and scored key baskets when the opportunities arose for him.

Matt Pond (Centennial) was big on the glass getting second shots and showing his versatility from outside with a nice three-point stroke. Pond is an intriguing prospect with his size, ball handling skills and ability to play inside and out.

Also sighted for their contributions over the weekend were Kareem Wright (Maplewood) and Juanya Smith (Hillsboro).

For the second consecutive season the Team Nashville 17 and under crew captured the title, this year's victim the Indy Blaze flamed out 60-45.

In the semi-final, Isaac Harris (Hunter's Lane) led a very balanced attack with 10 points as Team Nashville moved into their championship game with a win over the Tennessee Tigers.

Guard play was key as the dynamic duo of Corn Elder (Ensworth) and Devin Robinson (Ravenwood) each scored 13 markers in the championship game victory.

John Ross Glover (USJ) added 12 points and was a steady force with his scoring and rebounding prowess the entire event. Glover plays very well off the driving and dishing of the two quick guards and gets a lot of solid scoring opportunities.

Inside Team Nashville got inspired play from the likes of Vari Craig (Riverdale), Josh Phillips (PJPII) and the aforementioned Harris.

Team Nashville will venture on down to Mickey's kingdom starting this Friday for what appears to be an extremely loaded Super Showcase lineup in Orlando.