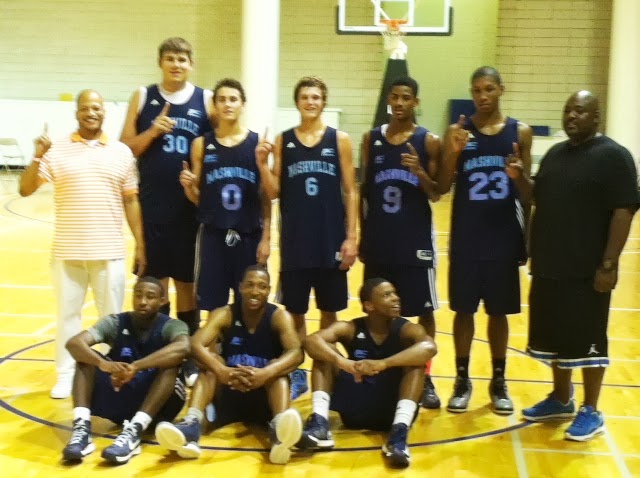 Good things were on display as the Power 24 in Atlanta concluded the final "live" period of the recruiting trail this past weekend.

Several Tennessee squads snatched championships and others fought hard and made some serious noise in their respective brackets.

Team Nashville saved the best for last balling out on Sunday and capturing the 17 and under Blue Division of the Power 24 championship with a 60-48 melting of  the Birmingham Ice.

Ryan Jones (Siegel) and James McPherson (Brentwood) were put to the test in the semi-final with the aggressive pressing nature of Team United. Both guards performed admirably and helped Team Nashville hold on for a 64-53 victory.

Jacob Saunders (Cheatham County) saved his best effort for the title game providing key buckets throughout the contest. Andrew Golden (Columbia Academy) and Reid Pierce (Blackman) each did an outstanding job on the glass.

Tori Smith (FRA) gave valuable minutes off the bench for both backcourt spots while Tripp Davis (Lighthouse Christian) provided depth and gave effort when on the court.

The Chattanooga Elite rallied from an early deficit behind 18 points from Sadik Spence (Tyner Academy) to douse the DeKalb Heat 58-56 and capture the White Division of the Power 24 in Atlanta.

Joining Spence in the scoring column were Orlando Moore (Brainerd) with 14 and Kendrick Thompson (Cleveland)
with 11.

The triumvirate of Moore, Spence and Thompson led the scoring throughout the event but several other made key contributions in a multitude of areas.

Alex Watkins (Tyner Academy) was key on the glass and hit a game winning foul shot in sudden death overtime to garner a win on Friday night. Logan Cox (Bradley Central) had several double digit games knocking down outside shots and keeping the lane clear for Moore and Watkins to operate inside.

Jaylen Smith (Georgia) was water bug-like playing tough on the ball defense and making key buckets in transition or from the outside. Sam Gregory (Walker Valley) provided a big body down low who snatched rebounds and played solid post position defense.

USSAA 15s (15 and Under Any Gym is Home Division  Champions)

Squad made up primarily of Nashville area players defeated the North Georgia Elite 63-60 to capture the Any Gym is Home 15 and under Division title at the Power 24 in Atlanta.

Cedriontis Wilson (Columbia Central) was the big scorer nailing 25 points including 6 threes. Wilson was assisted in the scoring column by Tim Smith (Ezell-Harding) and Malek Sain (Marshall County) each with 12 markers.

The Tennessee Chosen Few concluded a very successful summer falling to the Birmingham Ice (57-45) in the semi-finals of the Power 24 in Atlanta. Tre Fields (Virginia) put the final touches of his best efforts of the summer leading the TCF with 14 points. Rumor has it that Fields may be returning to the ranks of the Tennessee players before the school year gets underway.

Tyleke Love (Dobyns-Bennett) was a monster on defense once again deflecting several passes in help transition defense and converting them for buckets. Devin Sibley (Karns) is a very capable scorer who was consistent throughout the Power 24.

The Tennessee Chosen Few gave it all they had but simply ran out of steam falling 56-52 to Team Speights in the title clash for the Super Elite 16 and under championship game. Confidence was high after a narrow 56-50 victory in the semi-finals over Team Nashville, the TCF battled hard behind outstanding efforts from Justin Jenkins (Knoxville Webb), Kelvin Jackson (Fulton), Patrick Good (David Crockett) and Jorden Bowden (Carter).

Closing out with a victory in their final game of the summer both the Tennessee Tigers and Team Nashville 15 and under squads have us on the edge of our seats for what the future holds. The Tigers ended hard and tough with a 60-36 win over the Tuscaloosa Wildcats and Team Nashville dispatched TMP to the tune of 54-34.