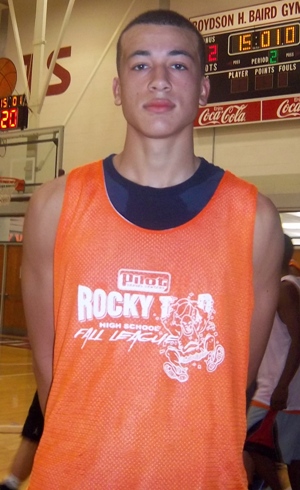 Championship Sunday was an outstanding afternoon with several close games and the inclusion of the Cleveland players into the mix. A last second shot for a victory and several big performances brought the PRTL to a close for the third season. For the Championship Sunday action we selected a game MVP for every contest which will be listed below the game write-up. I wanted to thank everyone for their participation and especially thank those players who actually showed up and participated throughout the season in both leagues. 12 college coaches made their way up to watch this day.

Micah Goss (Hardin Valley) scored a season high 22 points as Team Naler pulled out a tough 72-68 victory against Cumberland/Roane County in the opening game of Championship Sunday at Maryville College.

Goss was outstanding hitting key shots throughout the game. He was joined in the scoring column by steady Tevin Gunn (Hardin Valley) who added 16 markers of his own to the cause.

Sabian Smith (Knoxville Central) and Kyle Anders (Knoxville Catholic) each came up with 12 points in the close victory.

Those efforts p[oiled an outstanding day for rising junior Alex Fountain (Wartburg Central) who topped all scorers with 29 points on a variety of inside moves and short jumpers.

Rising sophomore Travon Fields (Science Hill) notched 21 points and Tri-Cities finished up the season with a 65-52 victory over Union County on Championship Sunday.

Fields scored on a variety of drives to the glass and hit a couple threes along the way to finish at 21, he was joined in the score book by Jaren Stewart (Cocke County), who finished with 17 and John Crow (University), who played his best floor game of the season finishing with 16 markers in the win.

Austin Hall (Anderson County) made his second bucket of the game a big one as he drained a three at the buzzer from the deep corner lifting Team Williams to a tough 83-82 victory over a determined Team Kimber squad.

This was a back and forth affair with both teams trading scores from the opening tap.

Blake Williams (Farragut) was high man for Team Williams finishing with 23 points on the day. He had plenty of scoring assistance in the form of Adarius Wilson (Grace Christian) who finished with 18; Preston Spaulding (Farragut) added 17 and Cameron Turner (Farragut) finished with 15.

Isaac Merion (Oak Ridge) was the big story as the rising sophomore finished with a league high 33 points on the day including 5 threes in his day's work. Zak Carter (Hardin Valley), who knocked down foul shots late to give Team Kimber the advantage before the Hall buzzer beater, finished with 21 points.

Leo Born (Baylor) was "en fuego" scoring 21 points including 5 from the bent line as the Cleveland #1 squad bested a scrappy Team Lee 68-63 in afternoon action at Championship Sunday of the PRTL Knoxville/Cleveland Fall League.

Born had a good deal of assistance in the scoring ledger with Jarod Rhodes (Cleveland) adding 16 and Alphonzo Cox (East Ridge) contributing 11 in the win.

Trey Suttles (Tyner Academy) and D.J. Bowles (Cleveland) scored 14 and 13 points respectively as Cleveland #2 got past the tough and hard nosed Blount County squad 68-63 in PRTL action at Championship Sunday.

Cleveland was very balanced with every player getting into the scoring column and overcoming a nice Blount County comeback late in the game to close out the victory.

Justin Ragsdale (Silverdale Academy) and Justus McMillan (Boyd Buchanan) both finished with 9 points in the victory.

Matt Shown (Alcoa) led all scorers with 16 points while T.J. Kimble (Maryville) played one of his best games of the season finishing with 13 points on the afternoon.

Shoffner has been outstanding all season long and today was no exception as the rising senior scored timely buckets and kept his squad in the lead during a crucial run in the second half.

Ross Cannon (Anderson County) played his best game of the season finishing with 19 points in the close victory.

Joining Sampson in the scoring column, Morgan Everette (Karns) finished with 17 points, while Devin Sibley (Karns) and Hunter Spaw (Grainger) added 15 each in the loss.

Team Jackson overcame a furious second half rally and used balanced scoring to capture the title at the third annual PRTL Knoxville Fall League with a 58-49 victory over previously unbeaten Sevier County.

A close game throughout got closer when rising senior Cody Malicoat (Jellico) hit a trio of treys narrowing the gap for Sevier County.

Malicoat finished with 14 for Sevier County.

All League Teams will be posted later this week; as well as, the final scoring leaders.