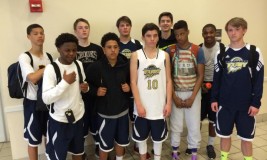 The summer scene officially gets underway when Knox Vegas comes to town.

The 6th annual Knox Vegas Heat tournament commenced all over the East Tennessee landscape this past weekend with plenty of Tennessee flavor to go around.

This first report will be on the 15 and under teams followed by the 16 and under squads tomorrow. On Wednesday the 17 and under teams and on Thursday I will pick the top 20 players I saw at the event.

In the semi-final a dog fight with a solid Kentucky Heat squad saw TCB fight back from a double digit deficit late behind the exploits of 2018 rising star Tray Hollowell (Kentucky). Hollowell hit a big three, dropped a classic and one then drained one of two from the charity to being TCB into the lead at 48-46 with 20 ticks remaining on the clock. An errant Heat shot careened off the rim and TCB moved into the title clash.

Tre Jones (Oakland) had a strong weekend in the scorebook and on the glass. Jalen Cambridge (PJPII) and Imani Starling (Ensworth) controlled tempo and set the tone defensively.

A fine showing for the Tennessee Vision saw them advancing to the final four before falling to the eventual champions North Carolina Heat in the semi-finals.

An unblemished run through pool play led by a huge 26 point effort from Chase Kuerschen (Knoxville Catholic) against the Kentucky Heat moved the Vision into bracket action.

Luke Smith (Knoxville Catholic) would come up big for the Vision in the quarter-finals nailing a game winner to beat 147 out of Nashville.

Kuerschen and Smith led the Vision in scoring throughout the event while Tony Scott (Knoxville Catholic) did his work on the glass.

Jeremiah Oatsvall (Brentwood Academy) introduced himself to the summer basketball world in a large way at KnoxVegas with some gaudy numbers including a 38 spot in the loss to Tennessee Vision in the quarter-finals.

147 got off to a fast start wining their initial pool play game against the Western Kentucky Elite behind 24 from JO then got a 36 point effort in a pool play win over the Nashville Burners.

Oatsvall dropped 39 in the final pool game to the powerful Team United squad from North Carolina before nailing a game winner with a 32 point effort against the East Tennessee Pyro.

David Ivy (Blackman) had a solid weekend cleaning up errant shots and getting some buckets on the interior. Donovan Sims (Blackman) was lauded for his defense and ability to keep the offense on point while Garrett Suedekum (Brentwood Academy) was sighted for his defensive effort throughout the tournament.

The Tennessee Fury came out to a nice showing in the 15 and under division finishing 4-1 after clean sweeping their pool the Fury fell to the eventual runner-up Team Corey Brewer 56-45 in the quarter-finals.

In the pool play opener Mac Brower (Georgia) and Spencer Lowe (Maryville) scored 17 and 16 respectively as the Fury defeated Next Level from Kentucky 64-50. T.D. Blackmon (Maryville) had a solid outing scoring a dozen in the win.

Connor Arnold (Grace Christian) stepped up big in the final pool play game dropping a cool 25 spot as the Fury crowned the South Carolina Kings 62-35. Brower added 10 in the win.

Jonny McHenry (Knoxville West) had his best effort of the tournament scoring a game high 21 as the Fury defeated the Nashville Cletics to advance to the quarter-finals. Lowe continued his solid effort scoring 15 while Blackmon added 12 in the victory.

A nice run for the Pyro falling to 147 63-62 on a last second buzzer beater. Zy Moore (Meigs County) led the scoring with 17, Trey Mitchell (Knoxville Central) added 13 including a big three to put the Pyro up against 147 before the game winner.

The Pyro got things off and running defeating the Nashville Celtics 61-41 behind 16 from Joe Pace (Lenoir City). Moore added 12 in the opening pool game victory.

Team Athens was victim #2 as Tee Higgins (Oak Ridge) led the scoring parade with 22 markers. Moore added 15 and Pace dropped 14 in the win.

Moore continued his scoring exploits adding 18 while DeAndre Gibson (Oak Ridge) finished with 16 as the Pyro torched the Alabama Premiere 68-51. Pace and Higgins added 10 each in the win.

Team Nashville finished the Knox Vegas event 2-2 losing both games by a slim margin. Tavin Lovan (Kentucky) led the squad in scoring in each contest.

Ruot Monylong (Hunter's Lane) made some strides on both ends of the floor finishing with double/doubles in three contests. Omar Lyons (Siegel), Austin Fisher (Clarksville Academy) and Michael Parker (Maplewood) each had double digit scoring efforts during the event.

Bryce Williams (Blackman) was lauded for his defensive effort and board work.

The Burners gave a strong effort over the weekend losing some close games but were quick to point out the contributions of several players including Michael Crawley (Pearl Cohn), Hassan Littlepage (Maplewood), Marques Whitmon (East Nashville), Deshawn Johnson (Maplewood) and Darius Ferguson (Hillsboro).

I was able to check them out on Saturday morning as they battled but came up short in a pool play contest. Hunter Vick (Camden Central) and Coulter Dotson (CPA) played solid in the contest while Clay Washburn (CPA) nailed several big shots from deep.