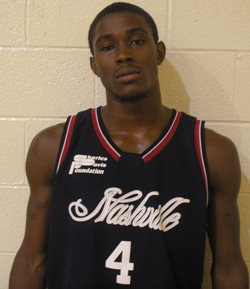 No rest for the weiry my friends.

After three days in Cincinnati, a quick jaunt to Louisville, the drive to Augusta closed out with a trip to Memphis, Orlando begins for me on Wednesday with the start of the Super Showcases.

As we stated earlier in the 17 and under Gold Division the Tennessee Travelers stand as the only Tennessee representative.

Moving on to the 17 and under Super Showcase Silver Division we find a few more squads whose addresses fall within our state lines.

In Pool E, "Mighty" Chris Jones (Melrose) leads the Memphis Stallions as they attempt to make some noise in the land of the Giant Mouse. Jones is spectacular but Brandon Wright (Hillcrest) and Nick Mason (Southwind) proved worthy of some consideration with their play at the River City Showdown.

Trickling down to Pool I, the resurgent Tennessee Tigers hope to continue a very fine July. Cory Stanton (Springfield) made believers of us all with his play in Louisville picking up numerous mid-major offers along the way. Michael Bradley (Tyner Academy) made some heads turn and the continued toughness of Carter Sanderson (Lipscomb) gives this team a leg up on their competition.

Robert Wade (Maplewood) had made July the month of Wade with his sensational efforts thus far. Team Nashville will compete in Pool O and if Wade continues his onslaught things will be bright. Teraes Clemmons (Mt. Juliet) continues to delight coaches with his already college ready body and Fred Lee (Maplewood) had the opportunity to make his future with another strong showing.

And finally the Tennessee Edge led by the very talented Kendall Jennings (Alabama) will compete in Pool U.

In the 16 and under Super Showcase things start with the Memphis Stallions in Pool A.

The 16 and under champions from the River City Showdown will have representation in Pool I. We speak of course of the Memphis YOMCA. Andre Hollins (White Station) was nothing short of awesome with his play in Memphis while Nino Johnson (White Station) and Wayne Martin (Mississippi) grabbed alot of attention for their size and skill level.

Dustin Clark (Hampton) is a name we need to becopme familiar with as he has been a huge sparkplug for the Knoxville Panthers who will compete in Pool Q. The transfer from North Carolina has some game winning skills and I cant wait to see him. Preston Vaught (Science Hill), Cory Billingsley (Sweetwater) and Skylar Brown (Seymour) will need to be at the top of their games.

Andre Brown (Clarksville Northwest) may not be a familiar name to you as of yet but by the end of July he certainly will be. Brown leads a tough Team Nashville, who will hoop in Pool U. Jacob Lloyd (Westview) and Justin Perry (Overton) are in the mood to make this a Team Nashville domination.

Cameron Golden (Ridgeway) leads the Memphis YOMCA 15 and under squad as they will represent from Pool C at the Super Showcase. Martavious Newby (BTW) will have the stage to show his emmense talent.

The Memphis Stars will compete in Pool E.

Craig "The Professor" Bradshaw (Greenbrier) leads the Tennessee Travelers into action in Pool L. Jaylen Allen (Science Hill) will need to be at his best as the youngsters will face some very stiff competition in this run. Alot will be expected inside for Matt Shown (Alcoa), Cory Nelson (Grace Baptist) and Cody Malicotte (Campbell County).