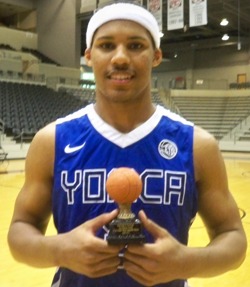 Week #3 saw some high scoring efforts come to the forefront.

DeSean Dockery (Ridgeway) started the day off with a blast dropping 30 points leading the Knicks past the Bulls 68-60 in Super 80 Week #3 action last week.

For his efforts Dockery was named the Super 80 Player of the Week.

Davell Roby (White Station) and DreSean Looney (Southwind) scored 17 and 14 respectively for the Bulls in the close loss.

Cameron Golden (Ridgeway) continued his torrid scoring pace dropping 29 points and leading the Lakers past the improving Pacers 74-58. Golden has been on a scoring binge the last couple of weeks. Anthlon Bell (Bartlett) added 17 in the tough victory.

Jacque Witherspoon (Ridgeway) had a fine effort despite the loss, finishing with 28 points on the afternoon.

The youngsters grew up in this battle as Khalil Spencer (BTW) led a trio of 2015 newbies with 16 points and a 52-48 victory over the Thunder. Spencer was joined in the scoring column by Marlon Hunter (Melrose) with 11 markers and Skal Lavissierre (ECS) with 10.

Cameron Payne (Lausanne) led the Thunder with 15, while Craig Hill (Ridgeway) contributed 14 in the loss.

Jamal Smith (FACS) led a balanced Celtics attack with 14 points and lifted them to a 54-46 win over the Heat. Smith had plenty of scoring assistance as Adam Weary (Ridgeway) finished with 13 and Jonathan Burroughs (Ridgeway) added a cool 12.

Alex Anderson (Wooddale) finished with a game high 16 for the Heat.

Austin Nichols (Briarcrest Christian) and Jarnell Stokes (Southwind) contributed 18 and 17 respectively and overcame a monster 27 point outburst from rising sophomore Leron Black (White Station) leading the Hawks to a hard fought 64-55 victory in the final game of the day at the Super 80.

Demarc Richardson (Briarcrest Christian) added 11 in the victory for the Hawks.

Matthew Butler (Memphis East) finished with 12 in the close loss.