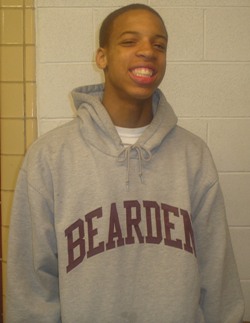 The smile tells the whole story.

Stat is headed to the Southern Conference.

Nathan Parker (Bearden) knew this would be the most important decision of his young life. Thusly he deliberated and scoped out his options carefully,  but in the end decided playing for Mike Young at Wofford was what would make him happy.

The Terriers of Wofford finished 16-14 last season, but a relatively young roster has huge plans for the near future.

Parker gives the Terriers a versatile athlete who can guard every spot on the floor and has the ability to score points in the paint, on the break or in the half-court. His position is not clearly defined but I like to call it..basketball player.

Give him minutes and he will be productive.

Parker will not be alone on the Terriers roster when it comes to the Volunteer state. Former Tennessee hoopsters Tim Johnson (ECS), a junior and Kevin Giltner (Harpeth), a freshman will welcome another of their bretheran with open arms.

Dustin Craig (Bearden) had pledged to attend the Air Force Academy ,but has since had a change of heart and has decided to stay closer to home and sign with Lincoln Memorial University.

The Railsplitters under second year coach Josh Schertz are an up and coming powerhouse who plan on wreaking havoc on the South Atlantic Conference next season.

LMU plays in the NCAA DII and is located in Harrogate, Tennessee.