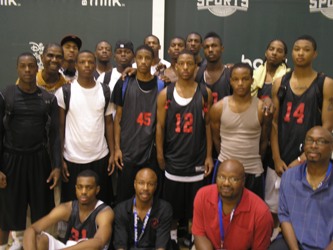 The month is winding down for the players but not before they put the finishing touches on a very good 17 and Under AAU National run.

The Memphis Stallions remain alive in the 2nd Consolation bracket sporting a 5-1 overall record after sweeping pool play at 3-0 then falling to the Albany City Rocks, who feature national Top 10 player Tobias Harris. Down to the consolation bracket the Stallions romp and make short work of the Columbia Hoyas (81-59), then tonight behind 28 from "Mighty" Chris Jones (Melrose) the Stallions drubbed the South Florida Elite 75-69 to set up a morning showdown with the Florida Rams and nationally ranked interior stud Fab Melo.

A real balanced effort from the Stallions as Jones added 7 assists to his scoring totals. Nick Mason (Southwind), Marcus Terrance (Kingsbury) and Anderson Cunningham (Cordova) were all the happy recipients of the dimes dropped by the mighty one.

The Tennessee Tigers came roaring out of pool play with a 3-0 mark and then for kicks blasted the Gulfcoast Rams 62-51 in their opening bracket contest. Reggie Gilmore (Tyner Academy) played his best game this summer with 20 points and 8 boards. Gilmore not only finished on the block courtesy of 9 dishes from Corey Stanton (Springfield), but also hit a couple of short jumpers. Stanton added 17 points, while Carter Sanderson (Lipscomb) finished with 16 points. Dezmond Johnson (Overton) led with 11 caroms.

As the games keep going the teams get tougher and the Tigers got caught in the net of a 76-56 loss to the always powerful Westchester Hawks. Playing their fourth game in two days the fatigue was starting to catch up with the Tigers and they fell in the final round of consolation play to the Connecticut Basketball Club 96-68.

Despite not playing up to Mid-State standards in pool action, the Ballerz left Mickey's world with their heads held high after winning a couple games in the classic bracket. Mid-State behind 37 points from Tarius Johnson (Liberty Tech) and 22 markers from Demarius Smith (Kenwood) walloped the Delray Eagles Elite 91-75, then liked it so much they did it again by the count of 91-83 to the Florida Rams Blue. Cordaro Williams (Liberty Tech) was outstanding scoring 18 points in the win. The Ballerz finally had run out of gas and they fell to a very solid Peoria Irish team 67-62.

On a quick note, in the DII Nationals the Tennessee Future Stars finished their pool 3-0 and won their first bracket contest to stand at 4-0. Meiko Lyles (USN) has been the scoring star dropping 28 in one of the pool games and Anton Van Lier (Hunter's Lane) chipped in with 18 in the same contest.