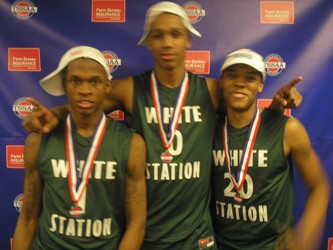 It took an overtime but the Spartans got their wish.

After last season's loss at state, the faces of then sophomore Joe Jackson and junior Ferrakohn Hall told of their disappointment and they vowed to return and be the ones with the smiles on their collective faces.

Using a regular season loss to these same Pharoahs as motivation, White Station rode the scoring of the talented Jackson, who would finish with 35, and the steady inside play of the senior Hall to coast by Raleigh Egypt 64-61 and capture the Class AAA state championship.

Jackson, who was selected as the tourney's MVP, came up with big plays not only from his scoring but a timely assist to classmate Julian Burton late in the contest gave the Spartans their moment and closed the gap to 54-53 with just over a minute remaining. on the clock in regulation.

Andre Hollins, who also secured a spot on the all-tourney squad, made a crucial steal with less than a minute remaining but missed the free throw to knot the score at 56 all and create the overtime session.

Ronald Brown was high scorer for the Pharoahs with 15. Anthony Jones and Rashad Harris each chipped in with 13.

Miami of Ohio signee Drew Kelly (Centennial) was selected as the Class AAA Mr. Basketball for 2009. Kelly who scored over 2,500 points in his career was selected by the media for his outstanding senior campaign.

The other two finalists for the award were juniors Kerry Hammonds (Siegel) and Joe Jackson (White Station).