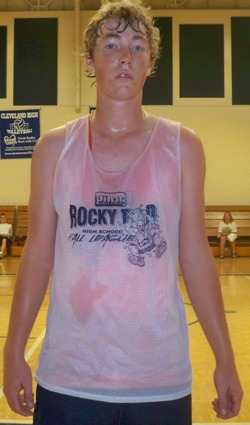 Week #3 saw the games move to the auxiliary gym and some of the best games we've had thus far were on the docket.

Ross was joined in the scoring column by Jared Rhodes (Cleveland) who finished with 25 in the victory.

The game was a series of huge lead changes and the balanced scoring of the Louisville crew almost kept them unblemished. Drew Zaleta (Walker Valley) led the way with 18 markers, while Darien Johnson (Bradley Central) added 16 points.

Despite the loss, Louisville by virtue of point differential, snags the top spot in the West Division and will tangle with unbeaten Vanderbilt this Saturday at Cleveland State.

Tevin Rutledge (Cleveland) converted an errant inbounds save for a bucket and a foul as Vanderbilt kept its record unscathed with a narrow 66-65 victory over a determined Auburn squad.

D.J. Bowles (Notre Dame) was straight up awesome finishing with 26 points on a veritable potpourri of jumpers and tough, contested drives to the glass.

Tyler Skidmore (Meigs County) busted the nets for a game high 31 points but it wasn't enough to overcome the four double digit scorers in the UConn lineup as they racked up a 72-51 victory in the days final game.