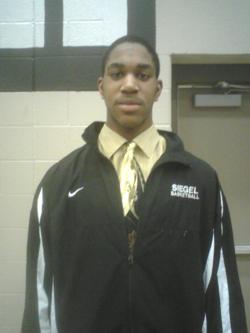 Back to the hardwood for a great majority of the prep squads in the state with Holiday events springing up all over the Volunteer state, over in Maryville the inaugural Nike Holiday Classic tipped off today with a host of good first round match-ups.

Stephen Hurt (Siegel) scored 13 points including an old fashioned three-point play to put the Stars ahead for the first time in the game and helped them cruise past Fulton 55-47.

A tough first half for both squads as they went back and forth before the Siegel size took over in the second half.

Hurt led the Stars with 13 followed by UNC-Wilmington signee Cedric Williams (Siegel) with 12 and Kyle Adams (Siegel) chipped in 10 points.

Lonnie McClanahan (Oak Ridge) scored 23 points and led the Wildcats to a 76-60 win over a scrappy William Blount squad.

Oak Ridge took an early lead and never trailed in this one despite a few nice Governor Comebacks in the second half.

With the victory the Wildcats will battle with Siegel tomorrow evening.

Darrius Higgens (Brainerd) was a man among boys scoring 16 points and snatching 16 boards leading the Roadrunners past McMinn County 63-49 in game three action at the Nike Holiday Classic in Maryville.

Brainerd will face the winner of the Maryville vs. Boyd County (KY) winner.