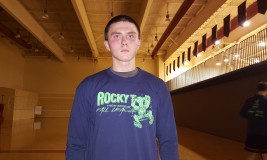 It may not be the official start to the high school season but for the past 8 or so years I have made the trek to Murfreesboro for the annual Siegel play day. In my opinion and for me the start of the high school basketball season.

Several teams, some lacking their gridiron athletes, some not make the trek to the 'boro and gave some solid efforts. Those teams included:

Here are 20 players that I saw who could have an impact on the success of their respective teams this season.

Listed alphabetically these players will be, that's how Yoda would have said it.

Slick athlete who can score, especially around the basket, he defends and is confidence away from being great

Skilled lefty who makes tough finsihes, shoots adequately and seems to be the go to guy for the Wolverines

Active guard, much improved shooter made several big steals and buckets throughout the day, heart and soul man

Great size for a guard, excellent shooter with range, once he takes defense just as serious he will be a must have

Good teams need leaders, the Camp has found one, slick lead guard, runs the show, passes and can score, nice

The Cats go as the Gee goes, he is a master at drawing fouls, he controls the tempo and has raised his scoring

Relentless worker on the boards, gets easy scoring chances and never gives up on a play, undersized warrior

Hit several big shots from three, has made this a weapon but don't forget there are other ways to score, athlete

Active rising sophomore, loves going hard to the rim, defends with passion and has an improve shot, Nation rise

He's small but he was all over the yard, his ball handling has improved, he sees the floor and can knock it down

Senior guard played with confidence and was spectacular passing the ball, his shot was on target, good job Brad

Best shooter in the state had a little struggle early but finished strong from deep, he will be key for the Lions

Fundamentally sound big man, scored at will inside, jumpers, hooks the arsenal was there, love his floor presence

Strong defender, has a relentless motor, can score off the dribble and his shot is not bad either, big year awaits

Rising sophomore guard was the go to guy for Dyersburg, he shoots the ball well with time and has ball skills

2019 guard with a major upside, he is smooth, shoots the ball well and is magnificent in the lane, good defender

Some others who had a good weekend