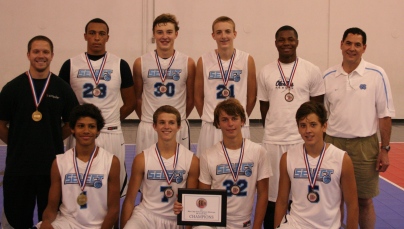 "Finish strong, people remember what you did last, not what you did first", a strong quote I heard many moons ago but very appropriate when describing the summer of the Select Basketball 15 and under squad.

Competing in their final event of the summer the Select Basketball team captured the title at the Blue Chip Early Exposure Showcase in Kentucky winning in the title game by 17 over the Tennessee Impact.

The Select cruised through pool play with wins over KYA, Dayton Metro and Alabama Dream then bested the Indiana Blizzard by 40 in the quarterfinals.

The next victim was a 39 point shellacking over the Illinois Speed before the championship game victory.

The title brings the Select record for the summer to 26-3 with three tournament championships and a championship game loss to the Cincinnati Knights at the Hoosier Shootout in another.

Solid team basketball and a willingness to play unselfish were the keys to the stability of the Select squad.

In the backcourt, Braxton Bonds (CPA) brought distribution to another level with his sterling play. Nathan Moran (BGA), Andrew Manuel (CPA) and Duncan Smith (MBA) provided defense and steady play at both guard spots for the Select.

Jake Allsmiller (CPA) played Mr. Outside while Andrew Cowie (BGA) and Andy Schumpert (Brentwood) teamed up to become Mr. Inside for the Select. Logan Montgomery (Collinwood) was a solid role player and was especially valuable on the glass, while Matthew Hailey (Ravenwood), despite some injuries, played with effort and heart when available.

Thomas Richard (CPA) drew praise from his coaches for his attitude and commitment. The young man has been injured the entire summer but never missed a practice and became a coach on the sidelines for his teammates.