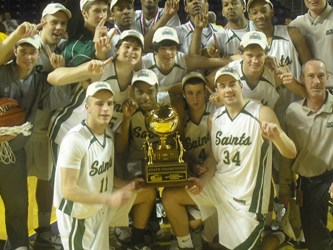 Maybe the fourth time is actually the charm.

No stranger to one another were these two squads as CBHS and Briarcrest Christian lined up to battle for the coveted gold basketball and the championship of DII Class AA.

CBHS had won two of the three previous meetings yet Braircrest was playing well down the stretch.

With Leslie McDonald saddled with foul difficulties, senior Elgin Lee stepped up in a major way scoring a game high 30 points and capturing MVP honors leading the Saints to the state crown 68-49 at Allen Arena on the campus of Lipscomb University.

Lee was magnigicent scoring 18 points in the first half and closing strong down the stretch being the beneficiary of several suberb assists from teammates Gregg Wooten ,Johnny Williams and McDonald.

Drew Barham kept CBHS close throughout the first half with clutch long range bombing and some nice pull-ups off the dribble.

Braircrest outscored CBHS 35-19 in the second halfto come away with the victory.

Lee led the charge for Briarcrest with 30 followed by McDonald with 15, Wooten added 11 and Williams finished with 10.

Lee was named MVP. Joining him on the All-Tournament squad were:

Congrats to Coach Harrington and his well balanced squad who played unselfish and classy throughout the season.